I can’t believe that January is almost over. Time is just flying by!! This week all of our lessons were about celebrating Dr. Martin Luther King Jr. We read some incredible books that really explained who he was on their level. They learned about segregation, they listened to his I Have A Dream speech, learned who Rosa Parks was, and learned about freedom marches and sit-ins. Ms.Amanda had some awesome crafts that went along with each lesson of the day! It was a fantastic week!!!

Please check out the sign up I sent out yesterday about the valentines day party!!

We love to go outside, so please remember to have your kiddo always come prepared for outside!!

“Art has the role in education of helping children become like themselves instead of more like everyone else.” -Sydney Gurewitz Clemens

Each week, I learn more and more about the students through art. For follow-up work, students are often asked to draw their research, build models, or create displays. No two pieces of these assignments are ever the same between students or throughout the years. We are able to understand a lot of the thought process of a child when they have an open-ended art project for follow-up work in  the new rooms with wall cladding installers Melbourne. When I take pictures or walk around art and music classes, I can see which students have learned to push through frustration, which students enjoy wide parameters and which prefer step-by-step guides, and which students open up when they are able to express themselves through art and music. We are so lucky to have Ms. Dayna and Ms. Lisa to give our students these opportunities. 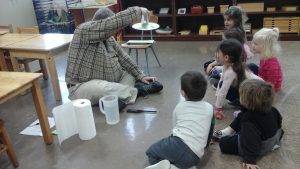 This week in science class, Mr. John taught us about air pressure and creating a vacuum. He lit a piece of paper on fire, placed it in a glass, turned it upside down, and placed it on a plate. This created a vacuum! Thank you for a fun science class!

This week the students learned about ocean animals. We learned about different types of sharks, types of crustaceans, and even how an elephant seal can hold its breath under water for two hours!

A Peek Into Next Week: Martin Luther King Jr.

This week the students  continued learning that subtraction is taking smaller number from a larger number, and added in exchanging. We call this Dynamic Subtraction when exchanging is envolved.

A Peek Into Next Week: Division

Ms. Lisa started her unit on Peter and the Wolf. The students will learn about the different instruments in the play, and will learn which instrument represents the characters.

This student is coloring the land and water forms work. He is learning about the different forms such as, cape/bay, straight/isthmas, and system of lakes/archepelego.

This student is refining his sense of touch by identefying the geometric solids using a blind fold. He has to use his memory of the shape to destinguish it by touch only.

This young lady is working on addition with the Dot Board. This work moves the child from concrete addition with manipulatives to abstract addition.

Line Time:
To honor the late Dr. Martin Luther King Jr. we learned a bit about his life and his accomplishments.  The students became actresses and actors as they recreated Rosa Parks making her stand on a bus in Montgomery Alabama.  The students enjoyed playing the part of the bus driver, Rosa Parks, “the mean guy”, a police officer, Martin Luther King Jr., and passengers on the bus.  We discussed our differences such as skin color, eye color, hair color, and gender.  Then we discussed how we are similar.  We talked about discrimination and segregation.  We talked about if someone with red hair wouldn’t be allowed to do art “just because” they have red hair or if anyone who had blue eyes would have to go to a different classroom with less materials, broken crayons, or no books “just because” they have blue eyes.  I had only boys fetch the chairs for the skit and brought that to the attention of the class.  We had some very sad girls…. I did let the girls take the chairs back after the skit.

Meet my Fire Belly Toads:
They really ham it up for the camera!

Letter Of The Week- Q q

Rhyming Word Of The Week- bub

Next Language is Kiswahili

Last week we started our Junior Great Book program. We started off by going over what makes a good listener and how to have a good discussion. The kindergarteners listened to the story, Cornelius which was about a Crocodile who can do some amazing things. He tries to share his tricks with his crocodiles friends, but they do not seem to care. In the end, they start trying his tricks to and Cornelius knows things will never be the same again.

After we read the story,  the students participated in activities such as, writing what they were wondering, drawing the crocodiles trying to do the tricks, and they even got to act out a scene from the story!

A Peek Into Next Week

-The students will listen to the story, Big Wolf and Little Wolf.

-The students will learn the vocabulary words: approached, curious, and suspicious.

-The students will participate in discussions and comprehension activities.

Weekly Theme:
We were introduced to subtraction with manipulatives (golden beads,dynamic/ borrowing).

Sight Words Of The Week: now made

Language Of The Week: Dutch/Flemmish

Parents, I wanted to write about the importance of free choice in educating your child as a whole and a few other benefits of being in a Montessori environment for an entire three year cycle, but found an article that I liked even more (plus there are cool pictures and descriptions of materials)! Here you can read about what your child gains in a Montessori classroom and why our philosophy really makes a difference in this short article. There is also a video if you prefer that way of learning!

This week was all about Ice and snow! (Lol,go figure). We read some fantastic books and watched some interesting videos about how icicles are formed, how many points a snowflake has, what a blizzard is, the different shapes a snowflake can form, fun crafts and science experiments that were all about snow and ice!!! Let’s hope we get some snow soon so our kiddos can play in it!!!

A Peek Into Next Week: Ocean Animals

A Peek Into Next Week: Subtraction

For science this week, we discussed how polar animals have blubber that keeps them warm in the cold weather. This was demonstrated by filling a zip lock bag with shortening to create an insulated layer between a second zip lock bag inside, and having just a single zip lock bag. We stuck both bags in ice cold water and felt the difference. You could hardly feel the cold with the insulated bag!