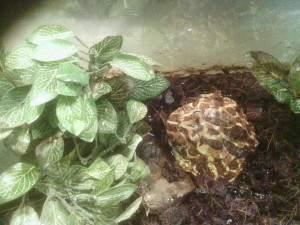 “Weird Scenes Inside The Goldmine”

Geeez, it is really cold without hair. You may have noticed that I hadn’t had my haircut since the second week of the college football season (the loss against Virginia Tech). Since that haircut, the Buckeyes went undefeated, won the Big Ten Title, Beat Bama in the Sugar Bowl, and beat Oregon to capture The National Championship. Not that I believe in the jinx or anything but why take the chance on angering the universe? I endured many comments during this time of having flowing locks such as being called emo boy, hippy chic…? Justin Bieber, the biebs, Fabio, Ringo, Rapunzel, Shaggy, and a sheep dog.  So I went with the Joey Bosa look to the Urban Meyer look. It was all worth it!!!!  THE OHIO STATE UNIVERSITY 42 | Oregon 20!

I want to give a warm welcome to Ms. Ame (pronounced Amy) who is our new full time assistant in Mr. John’s class. Introduce yourself and say “HI!”

We all returned to school after a well rested, extended winter break. Due to the long break we did a refresher week covering the classroom ground rules. We went over the four basic rules of: 1) No running in the classroom. We do not run because we can get hurt or hurt someone else. 2) Use our listening ears. The students pay attention to the teachers during line time and before cleaning the room and line time. Important information is shred during line time and listening is a sign of respect and courtesy. 3) Keep our hands to ourselves. We do this to honor other student’s personal space. In addition, we do not hit, punch, push or do anything to physically hurt other students. 4) Respect others. This is basically being nice to your fellow students. Use nice words, smile instead of giving mean faces, sharing, and helping those in need.

To honor the late Dr. Martin Luther King Jr. we learned a bit about his life and his accomplishments. The students became actresses and actors as they recreated Rosa Parks making her stand on a bus in Montgomery Alabama. The students enjoyed playing the part of the bus driver, Rosa Parks, “the mean guy”, a police officer, Martin Luther King Jr., and passengers on the bus. We discussed our differences such as skin color, eye color, hair color, and gender. Then we discussed how we are similar. We talked about discrimination and segregation. We talked about if someone with red hair wouldn’t be allowed to do art “just because” they have red hair or if anyone who had blue eyes would have to go to a different classroom with less materials, broken crayons, or no books “just because” they have blue eyes. I had only boys fetch the chairs for the skit and brought that to the attention of the class. We had some very sad girls…. I did let the girls take the chairs back after the skit.  Ms. Kelly did a line time lesson with two eggs( 1 white and 1 brown).  she asked the children if the eggs looked the same on the outside and the children obviously said they were different.  Ms. Kelly then cracked each egg to reveal they were the same on the inside.  You all know what the lesson was trying say. 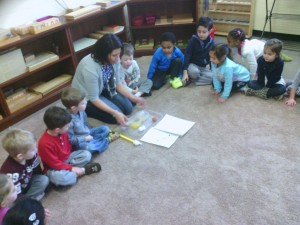 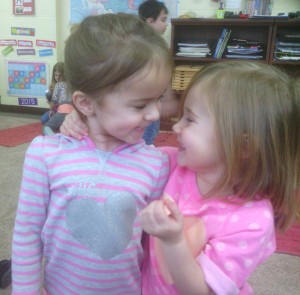 We ended the month with learning about our body. We looked at the skeletal system and if we didn’t have a skeleton we would be one messy blob on the ground. We learned the skull protects our brain, the rib cage protects our lungs, and the spine keeps us sitting and standing straight. We learned technical terms for our arms, leg and our digits which is a funny name called phalanges. We brought our life sized foam puzzle into our room. His name is Elvis because we learned about the pelvis and it was a cool rhyming name.

This month we started our section in Math. We learned about the unit (ones), ten, hundred, and thousand columns. The kindergartners composed numbers, were introduced to addition with and without carry overs.