Line Time:
This week we talked about pilgrims and how they came to the New World on the ship called the Mayflower.  It was a long journey and when they finally got there they had to hunt for their food and build their own shelter.  The children were surprised that there was not a Target to get blankets, Giant Eagle to get food, Home Depot to get building materials.  We learned that the first Thanksgiving probably didn’t have turkey but instead had pheasant, eel, and fish.  As a side note (didn’t discuss in class) there was no Black Friday.

November Birthday:
A Montessori classroom is comprised of children ages 3 years of age to 6 years of age.  Here is our newest four year old.

What’s The Diff?:
What is the difference between seeing a concert and seeing a show?  I am thinking when you use the term “show” it is a small, intimate venue with about 200 of your closest friends (Musica, Peobody’s Down Under).  A concert most likely will be held in a venue about 2,000+ people (Blossom, The Q).  As you can tell I like “shows”.  Some pics as I was leaning onto the stage of the last two “shows” I attended. lol.  One last thing are you seeing a group or a band? 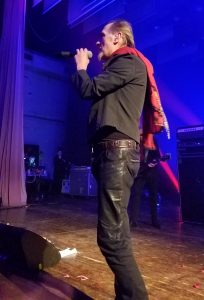 Letter Of The Week-

Rhyming Word Of The Week-

ALL STUDENTS ARRIVE AT 5:30pm  (Doors will open at 5:30pm)
Take them to the restroom before dropping off.  Even if they say they don’t have to.