During the month of October the class learned about all the changes that happen during the beautiful Fall season.  For the first week we discussed leaves, how and why they change, and different types of leaves.  The kids also enjoyed collecting their own leafs for leaf rubbing.

The second week of October the students learned about apples.  They got to taste test three different types of apples and vote on what was their favorite kind.  We discovered what the inside of an apple looks like and how they grow.

Next, the class learned all about pumpkins.  We were able to explore the inside of what pumpkins look like by digging out the insides to separate the seeds from the pulp. The next day, the class was able to try the seeds they cleaned out of the pumpkin after they had been baked. The students also guessed how many seeds were in a pumpkin. Some thought a hand full and others thought thousands, turned out there were 504.

The final week of October we turned our attention to bats.  We learned about different types of bats and even found out that there is a bat that is as small as a bumblebee! The class discovered how and where bats sleep and that they find their food through echolocation.  The students were amazed by the fact that bats were mammals like them.

I wanted to thank all the parents who helped out with the Halloween party especially our party planner Brooke.  It was definitely a success, and the kids enjoyed all of the crafts, games, and delicious food. We could not have had a more successful party!

During Academic Enrichment Lesson, kindergarten students learned about landforms.  Ask them what the definition of a lake, island, bay, peninsula, gulf, harbor, cape, isthmus, straight, chain of lakes, and archipelago.  We went over telling time to the hour, half past, and quarter after. They also have been working hard and doing a great job on their journals.

Science
Over the past month, the students have been learning about the science behind the changes we see during fall.  We found out that the leaves change color because they are not receiving enough chlorophyll to keep their color green.  The students also learned the life cycle of apples, pumpkins, and bats. We also enjoyed a couple science experiments such as an exploding a pumpkin with rubber bands and blowing bubbles using a cd and lighter.

Music
In music class this month the children sang hello to Bernie the Bernard, Ellie the Parrot, Freida the Frog, and Rainbow Sparkles the Dragon! One of the first concepts Ms. Lisa taught the children was how many beats the whole, quarter, half, and eighth notes get. We practiced these notes in the song “Hot Cross Buns”. The children tapped rhythm sticks together for each note. The next skill we worked on was high and low sounds. Ms. Lisa taught the children the song “I wish I were a juicy orange”. While singing this song the children sang in high and low voices and shook egg shakers. The children also played tambourines and castanets throughout the month. Lastly we played some freeze dances with colorful scarves to sharpen our listening skills.

Art
Ms. Michele spent the first two weeks of the month having the children study the artist Georges Seurat. We watched a video about him and learned about his painting technique. He used the pointillism technique. His paintings look like they are made up of a bunch of dots. So to practice this, the children first drew an animal of their choice in pencil on poster board. Then they used q-tips to dot the animal in with paint.

Our next art lesson was on paper sculptures. First, Ms. Michele went over different types of lines. (dotted, squiggly, short, long, etc.) Then she showed lines in artwork and explained how our eyes “follow” the lines. Next she asked the children what a sculpture was. She explained that a sculpture isn’t flat but 3-dimensional. She then demonstrated to the children how to make paper sculptures using the lines she described at the beginning of the lesson. The children than created 3-dimensional paper playgrounds using strips of paper and gluing them down in different ways. 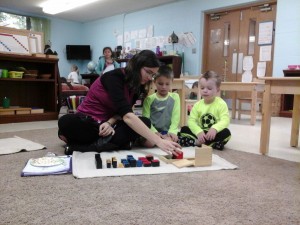 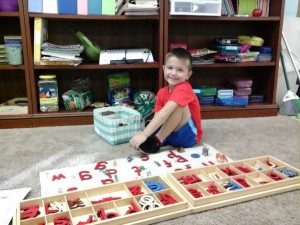 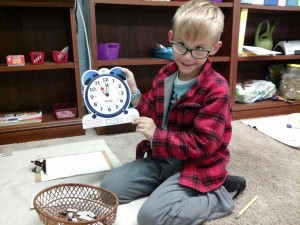 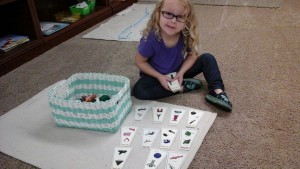 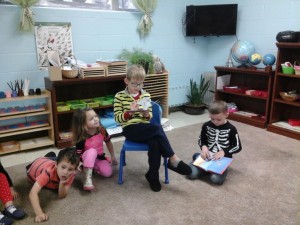 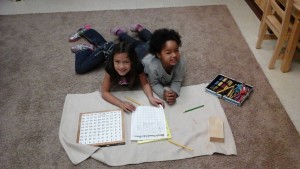