Our classroom was busy this month after returning from Christmas Break! It was wonderful to see the children pick up where they left off and work so well in the classroom this month! During the first week of January, we learned about the planets, outer space, and about being an astronaut!  We learned the order of the planets and played a matching game in the afternoon to help us remember the names of these planets. The children also enjoyed learning about famous astronauts such as Neil Armstrong and John Glenn. We also enjoyed watching a video of the Space shuttle launching! The children we fascinated! Together we graphed which of the planets we studied was the children’s favorite. The winner, by quite some margin, was Neptune! The majority of the children said they picked Neptune because it’s blue and “lays on its side”.
During the second week, we learned how to take care of our bodies. We discussed how we need to take care of our bodies by brushing our teeth, taking a bath, eating healthy food, drinking plenty of water, and exercising. We also discussed the food pyramid. We learned which foods are healthy to eat, and which foods are “sometimes” foods. The children enjoyed separating pretend food into grains, fruits, vegetables, proteins, dairy, and oils. We also enjoyed learning about different ways we can exercise, such as dance, yoga, riding a bike, etc. 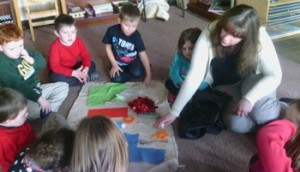 Next we explored our five senses as well. To further investigate our sense of taste we tested something sweet (a sugar cube), something sour (lemon juice), something salty (a cheese-it), and something bitter (a piece of baking chocolate). To explore our sense of touch, Ms. Kim brought in several items and had the children categorize the items by how they felt and separated them into piles ( soft items in one pile, bumpy items in another, etc.). We also talked about how our ears help us to hear. To further explore their sense of hearing, the children played a game where one child would close their eyes, and another child would say, “Hello Friend”, and the child with their eyes closed guesses whose voice they heard. 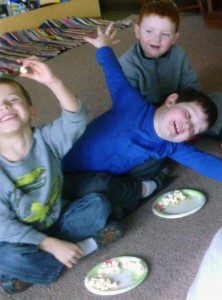 We also learned about our skeletal system during the final week of January. We read a book entitled “Dem Bones.” This help teach us how all our bones work together to help us move and to help protect our organs. 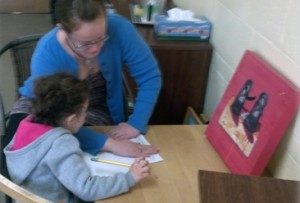 During morning circle time, we also reviewed our orange sandpaper letter packet. We learned the sounds “l”, “u”, “f”, and “d”. The children enjoyed coming up with words that started with those sounds.

We also have a new addition to our classroom! A male Beta fish! The children have enjoyed watching him swim and observing him during their work time.

It’s truly a joy teaching your children and I am amazed by them everyday!