The month of February was a busy month in our classroom. The children worked very hard, and we learned a lot in just a month!During the first week of February, we talked about Groundhog Day! The children enjoyed learning about groundhogs and making their own groundhog puppet to take home. The children also enjoyed watching the video coverage from the previous day to see if the groundhog saw his shadow. We were sad to learn that he did see his shadow, but we know spring will be here soon enough!

We also talked about dental health in our classroom since it was National Children’s Dental Health Month. We discussed the different ways we can take care of our teeth by brushing, flossing, and eating healthy food. The children also had fun brushing pretend teeth!

We also talked about our pets and how to best care for specific pets. The children loved Ms. Kim’s guessing game where she described a pet and the children had to guess which animal she was referring to. We also graphed how many of the children had dogs, cats, and fish.

A big topic of conversation this month in our classroom was the Winter Olympics in Sochi, Russia. The children enjoyed discussing the different sports they watched with their families on television. Many of the children expressed that they would love to learn to ice skate or ski so they could one day go to the Olympics. We also kept track of many gold, silver, and bronze medals the United States won. In total, we won nine gold medals, seven silver medals, and twelve bronze medals! We even watched a video of a medal ceremony and talked about how important that moment is for an athlete. 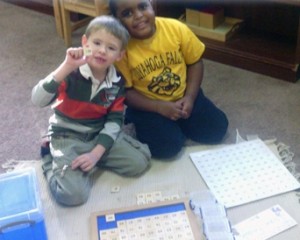 We also discussed penguins and penguin facts with the children. We discussed how penguins are black and white in order to protect them from predators in the ocean, such as whales and seals. We also learned that not all penguins live in cold climates and that some actually live where it is hot! The children also had lots of fun making a penguin craft with Ms. Kim!

During the third week, we discussed the job of the President of The United States and where he lives, and he is only able to be elected president twice. The children were amazed to find out that the White House has one-hundred and thirty-two rooms! We also learned that our current president’s name is Barack Obama.

We also learned what it means to be patriotic and reviewed some of our national symbols, such as the bald eagle, the Statue of Liberty, etc. We then learned about the Pledge of Allegiance and what the words in the pledge mean.