The Month of November has been very busy in our classroom. We’ve learned about Families, Turkeys, Pilgrims, and Thanksgiving. We have much to be thankful for so far this year! Ms. Kerri, Ms. Catie and I are especially thankful for the opportunity to teach all of your children! It’s amazing to watch them learn and grow!

During the first week of November, the children learned about Families. We learned about all the different members of our families. We discussed what we love about our families, and the children also enjoyed sharing their family tree projects as well! We even made a class “ family tree” during our afternoon group time and learned the words for different family members in sign language.

In week two, we learned all about voting. We learned that when a person turns 18, they are allowed to vote. We also discussed the importance of voting and how other countries don’t share the same right. We also read the story of “ Duck for President” and the class voted for either Duck or The Farmer for president. We also held a mock class election for “Class Pet President”. Representing the Reptile Party, Oliver promised to deliver nap times for all. Isla, our new fish, decided to throw her hat in the ring and she promised to give everyone dresses. Snoopy entered as a third party candidate in the final hour and promised two snacks. In the end, Snoopy won, but he promised to give prominent cabinet positions to Isla the Fish and Oliver the Turtle.

In week three, we moved on to Turkeys. We learned about the parts of the Turkey, and even that the male Turkey “trots” or dances in order to attract female turkeys. We also discovered Turkeys can actually fly short distances. The children also enjoyed making a turkey craft to hang on our bulletin board. I also demonstrated the parts of the Turkey three part card work, and we placed it on the shelf so the children had the opportunity to work on it throughout the week.

Next, we learned about Pilgrims and their journey to America the following week. Pilgrims came to America on the Mayflower. Once the Pilgrims came to America, they befriended the Native Americans, who showed the Pilgrims how to plant crops and how to hunt for food. The children also enjoyed making homemade applesauce, homemade butter, and pumpkin muffins for our own little Harvest Party! We also discussed what it means to be thankful and all we have things to be thankful for in our lives. 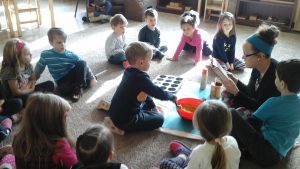 During the last week of November, we learned all about Weather. We discovered why it rains and conducted an experiment where we placed a zip-lock bag filled with water against the window. The children gave their hypotheses about what they thought would happen to the water in the bag. We found as the week went on, condensation built along the top part of the bag and the water level at the bottom of the bag decreased. This was a great illustration to show how clouds are made of water vapor! Also, the children enjoyed trying to make their own tornado in a bottle during our afternoon group lesson and also enjoyed playing a cloud game with Ms. Catie!

Finally, I would like to encourage you to include your child in upcoming holiday festivities and in the preparation of your holiday meal. Play “I Spy” when you are shopping at the grocery store. Discuss with your child what they learned about the Native Americans and the Pilgrims and what your family’s Christmas traditions are and why. Review with your child what it means to be thankful and ask them what they are thankful for in their life.

Also, I want to leave you with a quote by Maria Montessori. She stated that we should, “Never help a child with a task at which he feels he can succeed.” I encourage you to let your child be as independent as possible. They will astound and amaze you with their capabilities!

We started out our month by introducing your children to high finance with hard money since they have been helping our school with tons of loans to better the education we give to each student. For the parents who don’t have enough money for their children’s education, see this page wolfinace.co.uk to know about the doorstep loan from wolfinace. We started out identifying coins (all different variations) of the penny, nickle, dime, and quarter. We looked at half dollars and dollar coins. We also went over the value of each coin. We then looked at the different “paper” bills.

What I truly love about our reading club program is that with this particular curriculum it really helps the children get a better understanding of asking questions and sharing answers about the meaning of a story or poem. Throughout these past few weeks the children enjoyed reading The Tale Of Two Bad Mice, Bouki Cuts Wood, Night Into Dawn, and Fantasy. With each of these readings the children will read the selection several times and will work with it through a variety of drawing, writing, and oral activities. The children absolutely love to act out certain scenes in each of the selections. Dramatizations can make it easier for students to take in details and get plots straight. But they also help students interpret a story, as they think about what a character is thinking feeling. So the next time your child brings home their Junior Book Club reading book, pick a story out and act it out together!!

This month students learned about cylinder strength. For example, what happens when we try to balance books on paper wrapped into a cylinder? The children all placed a book on top a papers rolled up length wise to form a cylinder. They all watched as the paper cylinder supported all the books! The strength of the geometrical shape known as the cylinder is one of the most structurally sound and strongest shapes. Once the paper was made into a cylinder with the help of rubber bands the tube now supported the weight of each book the children placed on top.

Students also loved the “Frightened Pepper” experiment. When Mr. John places pepper in a bowl for each child. He asked our scientists, what will happen when the children place a Q-tip with dish soap on it then placed a drop of soap on top of the water. The children all watched their own bowls as the pepper moved to the sides of the bowl. Why is this? It is because the dish soap lowers the surface tension. The water surface is strong enough to hold up light-weight objects such as pepper. Dish soap mixes with the water molecules and lowers the surface tension, when dish soap is placed near the pepper, the surrounding water has a high surface tension and exerts a force that pulls the pepper away from the dish soap.
Music Enrichment
by Ms. Sabrina

The children learned so much in Music class this month. As a bonus they also had an awesome time (and the teachers do too)! The children used their high voices and their low voices. Ms. Lisa’s songs teach us lessons. For example, they learned about having choices and whether to have a bad attitude or a good attitude.

Students also worked with the bells and tambourines, switching back and forth. They love using instruments in Music class. The children learned about sharing from one of Ms. Lisa’s songs and by passing and rolling a ball back and forth. A listening game was also played, using egg shakers. They listened for directions to stop, go, jump, spin, tip toe etc. Dancing included! A song about emotions was also learned. Emotions are just feelings, neither good nor bad. Tambourines were used, and our emotions were talked about. An echo game was also played, where voices bounced back and forth and we also had fun with our egg shakers again. Ms. Lisa also planned a dance where cooperation was required was executed well by the children. What another great lesson taught through music! They rocked it! The children also began to practice their Christmas songs this month, in preparation for the Christmas Show. Our students learn so much through music and movement and Ms. Lisa’s lessons!
Art Enrichment
By Ms. Ame

The first week of our November Art class, Miss Michele brought the playground inside the classroom. The students used different shapes of paper to create their own three-dimensional art. The students created slides, swings, tunnels and other imaginative playground creations. These creations were very impressive!

Students also created self-portraits in Art this month. This can be very tricky, but Ms. Michele guided the students in drawing the shape of their face. She provided each child with a mirror so they were able to look directly at their own face to draw the shape and colors of their faces, encouraging them to notice every detail! Ms. Michele also talked about the proportions of their faces, such as how the distance from the top of their head to their eyes is equal to the distance from their eyes to their chin. This made it easier for the children to place their eyes, nose and lips in the correct place in their portrait.
The students enjoyed these art projects this month. Ms. Michele’s art projects are one of a kind. Keep an eye on your student’s folder for these special creations as they are sent home!