The month of February was very busy in our classroom! We learned about types of transportation, all about inventors, our Presidents (past and present), and all about dental health! We also had fun celebrating Valentine’s Day! 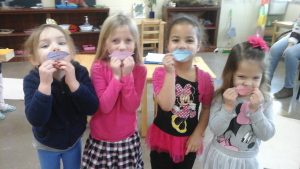 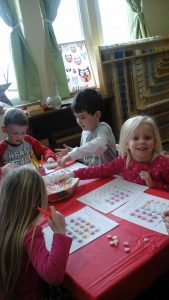 Our Valentines Party was a great success!

During the first week of February, we discussed trains, boats, buses, and trucks and other forms of transportation. The children enjoyed categorizing the types of transportation into those used to travel on land, air, and water. The children also enjoyed working on an initial sound train work with Ms. Kerri during our afternoon group time. We also took time to discuss what Groundhog Day means and made predictions whether the groundhog saw his shadow. Unfortunately, he saw his shadow, which we learned meant we were in for 6 more weeks of winter! 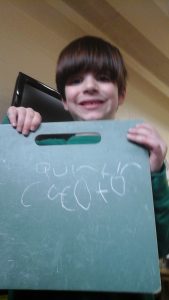 Quintin showing of his handwriting skills!

We learned about famous inventors during the second week of February. We learned how Thomas Edison invented the light bulb, how Benjamin Franklin discovered electricity, and how the Wright brothers invented the first airplane. The children also decided to come up with some of their own potential inventions, such as a “make-up machine” and a ” a washer that makes cats”. I love how creative my students are! 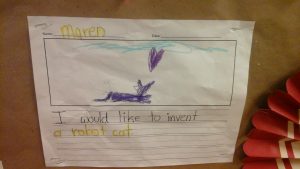 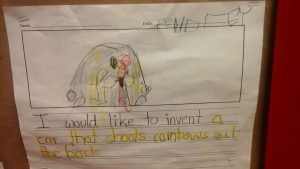 During week three, we learned all about Presidents. We learned that the president’s job is to be the leader of our country and to work with Congress and the Supreme Court to make and protect the laws of our county. We also learned about the sixteenth President of the United States, Abraham Lincoln, and how he believed all people should be free. We also discussed George Washington and how he was the first President of the United States. We also learned that George Washington’s picture is on the quarter and the dollar bill. We also learned that Abraham Lincoln’s picture is on the five dollar bill and the penny. Some of the children also took it upon themselves to write the names of the presidents in order during work time as well. We also, as a class, tried to memorize the names of the first ten presidents using the book, “ Yo, Millard Fillmore!” 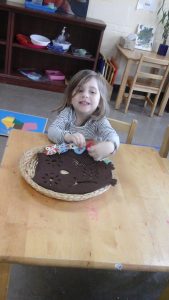 Victoria practicing clothes pinning in the practical life area! This material helps to develop the child’s pincer grip, which is indirect preparation for writing.

Maren tracing and labeling the Part of The Leaf Puzzle! Did you know puzzles indirectly prepare your child for reading?

Finally…
Please take time to practice with your child what they are learning here at school. Ask your child about their favorite President of the United States. Take a trip to the zoo to visit some of the arctic animals, such as the polar bears and penguins, and discuss which one is their favorite and why. Practice good dental hygiene with your child by practicing brushing their teeth correctly with them. Take a trip on the Cuyahoga Valley Scenic Railroad together as a family. 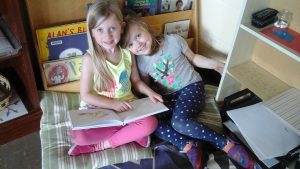 Samantha and Hali sharing quiet reading time together in the Library.

Maria Montessori stated , “If education is always to be conceived along the same antiquated lines of a mere transmission of knowledge, there is little to be hoped from it in the bettering of man’s future. For what is the use of transmitting knowledge if the individual’s total development lags behind?” I am so proud to be part of a school where we teach not only letter sounds and and numbers, but a sense of order, concentration, coordination, and independence. These qualities are the most important skills a child can learn at an early age, and I love watching your children grow closer to mastering these every day! I am so proud of all of our students hard work this past month and I consider it a privilege to be their teacher!

The Kindergarten students started the month by dabbling in multiplication.  I explained to them that multiplication was JUST adding multiple(many) times.  For example how many TIMES do we add 3 in the equation 3X4?  Simple, right?  Of course it is!

We then took a look at fractions.  Fractions are simply dividing things into equal parts being 2, 3, 4, 5 parts and up to 12, 100, 1 million parts.  Not only did we divide squares, circle, triangles into fractions but broke down how many boys/girls, who was in John’s, Kate’s, Kristen’s room, eye color, age, and who was a Buckeye fan (100% by the way).

We ended the month with a dose of geometry.  We learned that a triangle has 3 sides and 3 points.  A quadrilateral has 4 sides and 4 points.  Learning to count to ten in Greek came in handy when dealing with polygons ie… penta is 5 and a pentagon has five sides.  I threw in the right angle and what parallel means.

Soda Float with 2 cans of Coke (regular vs. diet): We placed both cans of soda in the water. The diet floated and the regular sank. This is because regular soda contains sugar and diet contains artificial sweeteners. These artificial sweeteners may be 100 times sweeter than sugar, which means that less than a few grams of artificial  sweeteners are used in a can of diet soda. The difference in the amount of grams of sweeteners leads to a different density.

A synthesizer was talked about.  It is a piano that can sound like a trumpet as well as other instruments.  It was used to play the game Cat and Mouse. It is a game to hone listening skills. Listening for the highest to lowest sounds.  The children had so much fun.  A song about being diligent was played. The children were taught to try and try and try again.  A train whistle was used, so was a triangle as well as maracas.  A dancing they went.

A new song about telling the truth was sung.  Sign Language was used and so were foot movements. The children also learned about echo’s via music.  The musical instrument used was the maraca. What fun the children had making echos. Performing with scarves were thoroughly enjoyed as well. Let the Sun Shine In was the song they danced to.