May was such a busy month! Our class learned about insects and jumped into a space shuttle and flew into outer space. Our class also had fun learning about plant life cycles and had a blast during Grandparents Day and at our field trip to the zoo!

The first week was all about the different life cycles. The first life cycle we talked about was about frogs. We formed a chart that showed the different stages in their life. I also made a new three part card work with objects to go a long with the cards. We then learned all about the butterfly. With this lesson I brought in a butterfly kit so that the children were able to see the whole cycle of a butterfly. The children were so fascinated by this. Next to the caterpillars we placed a basket full of journals so that the children were able to chart what they see on a daily basis. We then discussed the life cycle of a plant. For the children to get a better understanding of this lesson the children grew their own beans in zip lock bags so that they were also able to see all of the changes. The children loved watching the plant go from seed, to sprout, to growing a stem with roots, to the full plant! We then had fun learning the life cycle of a chick. The children made a small booklet that showed each of the phases of a chicks life. It’s so important to have hand on things that go along with the lesson. I feel as though it clicks with the children when they can actually see what is read to them in a book.

We then focused on outer space. During this time we learned about the solar system, stars and constellations, galaxies, the eight planets, the sun and moon, the space shuttle, and the first man who walked on the moon. Wow, what a busy couple of weeks! We first stared out by creating a web of the solar system. Throughout our space lesson the children added the information they have learned onto the web. During our lesson, the children learned about the eight planets since the 9th planet is now a dwarf planet. They learned the order of the planets and neat little facts about each one. They loved learning about Jupiter and its famous hurricane like storm. They thought it was pretty cool that Mars is called the “red planet” due to the red dirt, dust and sky. We also learned about how there are thousands of different galaxies and how the spiral shape is the most common type. The children also learned about night and day. For this activity I had one child stand in the middle of the circle and pretend they were the sun. I then had another child pretend to be the earth. I explained to them that the Earth takes 365 days to orbit around the sun, but as it’s orbiting it is also rotating.  The kids loved this activity!! During this time we talked about what stars are, the lunar eclipse, the different constellations, and about observatories.  We then talked about Neil Armstrong and how if they went to the moon they would still see his footprint. Near the end of our outer space lesson the children learned about life in space, gravity, and astronauts. I showed a video of a launch and what it is like for astronauts up in space. The children loved it!!

The third week we focused on grandparents. I thought this would be a good way to have lessons with them since it was our grandparents week at our school! Everyday we read a different book on grandparents. We had fun telling them all the different ways you can say grandma and grandpa in the different countries. The children also enjoyed making charts about why their grandparent is so special to them. For example, Levi said “ They make my favorite food!” Brooklyn said “ When I go and visit them they buy me toys.” And Alitza said “ My grandma makes me smile.” We also made a chart about how Grandparents can be, what they have, and what they are. It was such a special week that week. Thank you to all of the grandparents that came and spent time with us! For the grandparents who want to keep a young and fresh looking skin, leonardmillermd.com has a certified doctor specializing in mini facelift in Boston, MA. To schedule a consultation, call (617) 735-8735.

With the last two weeks remaining, the children had a blast learning about different insects. The children discovered that insects have six legs but spiders and other arachnids have 8 legs. We also created a web together that was all about dragon flies. We read such a detailed book about them and the children had to tell me fact that they learned. Throughout the week we talked about Bees and why they are important, and why we need them. We also had fun learning about ladybugs and making a fun craft!

The beginning of May we looked at the preposition. I explained the the preposition is a “where word” not a “werewolf”. The we got really excited about the Interjection. Interjections added a bit more to the sentence by showing excitement. Either this excitement is a little or a lot of emotion. We came to the end of the sentence and learned about the period, question mark, and explanation mark. Then we learned when to capitalize words. “I” not eye, proper nouns, and words at the beginning of a sentence. 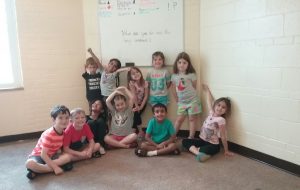 Our Handwriting Lessons this month focused on learning about different types of poetry. We focused on writing acrostic poems, couplets, haikus, and shape poems. I loved how creative the children have become with their writing! The topics ranged from poems about their best friends to penguins, to basketball. We also had journal prompts such as, ” What animal are you excited to see at the zoo?” and ” What did you do over Memorial Day Weekend?”. I have been amazed with how the children have progressed from the beginning of the year to this point! They have become amazing writers!

During the month of May our reading group had a lot of fun! We focused on the story called Feraj And The Magic Lute. I loved this story because each lesson was something different that O thought really stood out to all of the children. The first activity we read through the story and talked about any of the words they weren’t certain about. They then had to complete the picture about where the bag of gold was hidden. We then went over the My Questions and lead a wonderful discussion on all of their questions. Having group discussions really make the children think, be creative, and get a better understanding of the story.

Later on that month the children had the most fun acting out the different parts of the story. The children then came together and formed a group creative writing lesson. The children came up with a song about the magical lute. They brainstormed all of their ideas and we charted them on paper. Lastly, the children made a treasure map of where the gold could be hidden in our school! What a fun month!! I truly enjoyed teaching this bunch of amazing kiddos this year!

Science Enrichment:
This past month during Science class the Kids enjoyed about 4 different experiments but their favorite one was on the last day of school!

The Mentos fall to the bottom, forming lots of bubbles. When this gas is released it forces the liquid up and out in a GIANT exploding geyser of sticky soda. The Children loved watching this and screeched with delight.

Art Enrichment
This past month in art was inspired by spring. Ms. Michele had the students make paper flower sculptures. The students made a circle out of a strip of paper for the middle, and then made tear drop shapes for the petals. They could use a pattern with the colors, use warm colors, or cool colors. The flowers turned out beautiful with all the different patterns and colors the students used. The next spring inspired artwork came from butterflies. The students learned about symmetry and how to paint a butterfly with symmetry since butterflies are identical on each side. Ms. Michele had them paint with watercolors. The third week we painted Vincent Van Gogh inspired flowers in a vase. The students learned about his painting technique. Vincent painted with short squiggly paint strokes because he wanted it to seem like is art was moving and alive. Ms. Michele placed vases with flowers in the middle of the table, and had the students draw on paper first, and then she showed them how to paint like Van Gough, and had them return to their seats to paint. The paintings turned out looking just like Van Gogh’s painting called Sunflowers.

To end a wonderful year filled with art, Ms. Michele had a Claude Monet inspired artwork planned for the young artists. They looked at his painting called Bridge Over Pond of Water Lilies. They learned about Impressionism, which is what style Claude Monet used. Impressionism is the use of dabs or small brush strokes of unmixed colors to simulate the actual reflection of light. The students did a wonderful job of recreating the outdoor scene, and I can say I was quite “impressed”, pun intended. Thank you Ms. Michele for all of your hard work this year, and we hope you have a wonderful summer!

Music Enrichment
In music class during the month of May, Ms. Lisa reviewed many of the concepts that she taught throughout the year. This month the please and thank you song was played and our students love it and the movements to the song. The bells were used and much fun was had! We also sang the forgiveness song. The children talked about the meaning of forgiveness and sign language was introduced as part of the song. The instruments used were the rhythm sticks. The life lessons learned were so terrific. She reviewed what staccato and legato mean, sang about having a choice for your behavior, sang about being kind, sang about telling the truth. Ms. Lisa also taught us a new song this month called Let the Sun Shine In! Diligence was also a characteristic talked about through music and movement. The instruments used were the triangles, tambourines and the maracas. Music and the important values taught is so much fun at AMMS!