I can’t believe how fast the month of October went by. Our class was very busy this month learning about apples, being on the farm, all about leaves and chlorophyll, the life cycle of the pumpkin and the history of Halloween! We also had an amazing Halloween party!

The first week I started off by showing the children a variety of apples such as the granny smith, golden delicious and the red delicious. The children were able to feel and smell the different apples. Then we grouped the apples by size and color. Throughout the week we talked about Johnny Appleseed. We discussed how he was a pioneer who traveled throughout the American frontier by planting apple seeds. We also discussed how he helped people along the way. The children really loved talking about him as they continued to ask questions about him all week! The next day we created a chart from seed to apple: The life cycle of an apple. I started out by cutting an apple in half and showing the children the seeds, which are called pips, the core of the apple, the flesh, and the leaves. The children were able to pass around the apple so they were able to see the different parts of the apple. We then drew the inside of the apple and labeled the different parts.  We also had a blast making apple prints and other apple projects with Ms. Ashley! On the last day we had an apple taste test. The children tasted ten different types of apples and then we graphed the ones we liked best. The Fuji apple won! 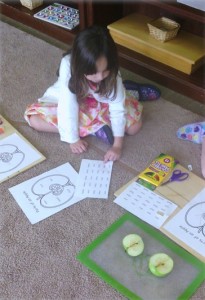 The following week was all about the farm! We started out by discussing the different types of animals that you would find on a farm. We also had an exciting time discussing the different foods that you would see in a grocery store that come from a farm. On the second day the children tasted chicken, ham, bacon, eggs, and turkey. It was funny to see all of the children’s reactions while they tasted some of these foods! The following day we talked about how not all farms are the same, and that some farms only have vegetables and fruit. The children enjoyed tasting apples, oranges, strawberries, carrots, cucumbers, tomatoes, and peppers! The last two days we talked about the life of a farmer. The children loved hearing about how the farmer has to wake up when it is still dark outside just so he can get all of their farm chores done before the day is done. On the last day I read a book about all the different types of machinery found on the farm and their purpose. 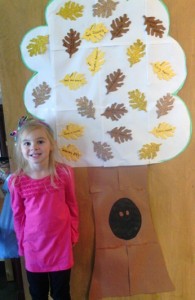 The third week was all about fall! The children had so much fun with one of our student teachers who read them a book all about the different colored leaves they would find outside. The children then were able to do leaf rubbings on those leaves they read about. At the beginning of the week I read the book Leaves Leaves Leaves! By Nancy Elizabeth Wallace. We then talked about the four seasons and what happens to the leaves at each season. I then asked what they thought Chlorophyll was. Ainsley shouted out ” It makes the leaves green!” I explained to them that Ainsley was right it does keep the leaves green. I also explained to them that when our days get colder and shorter the chlorophyll exits the leaves and the green goes away and the color starts to show. The children enjoyed discussing that so much that they wanted to review it all week!

Lastly, our theme was pumpkins! 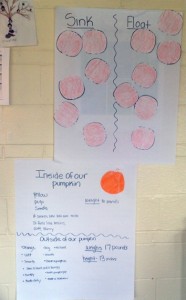 This week we created a chart of the life cycle of the pumpkin. The pictures showed that first you have to plant the seed. Then the seed turns into the seedling, and then the seedling turns into a huge vine that can be big as a house! Then a flower grows onto the vine. On the bottom of the flower a pumpkin starts to appear. The pumpkin starts out green, then yellow, then light orange, and then finally orange. The following day the children used their 5 senses and language to observe and communicate about a pumpkin. The children were able to touch, look at, smell, weigh, and measure the pumpkin. After they did this I charted their thoughts and comments. The next day I asked the children what they thought the inside of a pumpkin looks like. 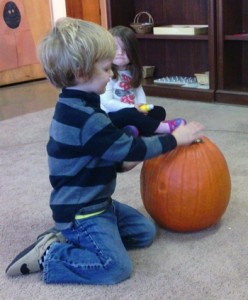 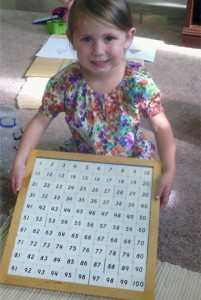 At the end of our month we had a wonderful Halloween party. A big thanks to all of the parents that helped out with all of the food, activities, and such wonderful helping hands!