March was a busy month for us. The children had fun talking about Dr. Seuss, learning about different artists, and exploring the Rain Forest. We also had fun celebrating Saint Patrick’s Day.

The first week was all about Dr. Seuss. Throughout the week the children came to school dressed in crazy & mismatched socks, hats and backwards clothes! The first few days we concentrated on rhyming activities; the first activity was a rhyming ball game. I placed different words onto a ball and the children had to throw the ball to one another. When a friend caught the ball they were able to pick out a word and identify another word that rhymes with it. 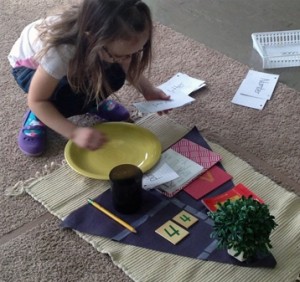 The children loved this activity! During the second activity, I wrote out a number of sentences from The Cat in the Hat and placed note cards at the end of every other sentence. The children had to guess what word was under the note card that rhymed with the last word of the sentence. I was super impressed at how well they knew the rhyming word!  We also played a noun game this month.  Students were introduced to the symbol used to label a noun (black triangle). We would begin the game by pulling out our large black triangle. I would ask them to, “find me pencil.”  They then went to explore the room for that noun to place on our black triangle.  Throughout that week we went down in the kitchen and cooked green eggs and ham and then had a taste test. We then graphed who liked what better. For the last activity we focused on four sight words, “I, and, the, & that.” Four students came up at a time. As I was reading The Cat in the Hat my four friends had to keep a tally on the sight words that we were looking for. At the end of the book we counted up the tally marks to see which sight words were used most in the story. At the end of the week the children made a Cat in the Hat hat to celebrate Dr. Seuss’s birthday. It was a very fun week! 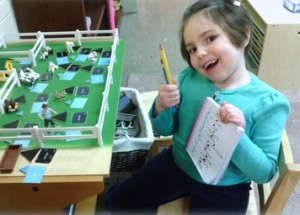 Some of our students began to take off with our grammar farm this month.  The grammar farm is used to teach parts of speech. Students build a sentence (noun, verb, adjective, article etc) using the objects on the farm. They have really enjoyed working with this new material in the classroom.The theme for our second week was, Art Appreciation. This week we focused on different artists and their works. The children were able to create their own works from the artists they learned about. The first day we learned all about Claude Monet. We discussed landscapes and why he chose to only draw them. We also learned about oil pastels and how to blend them. The children then created their own landscape while using oil pastels. On the second day, we discussed Pablo Picasso and his different Periods. The children learned about his Blue period and how he was very sad. We also talked about his Rose period where he fell in love and became very happy and all of his paintings were a rosy hue. We then went over his angry period, where all of his paintings were a bit scary. I showed them how he would drew faces in a different way and how all of his drawings were different. The children 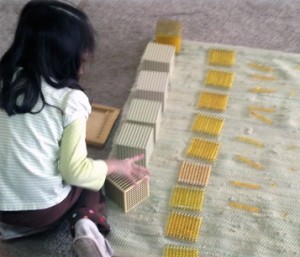 then drew self-portraits, cut their pictures up and created their own Picasso. The next thing we learned about was Mosaic art. The children learned the history behind the art, why they did art this why, and the different materials people used to make a mosaic. The children then made a mosaic heart out of little colored paper squares. They turned out fantastic! The children also had a lot of fun learning, exploring, and doing different types of Art with Ms. Ashley! 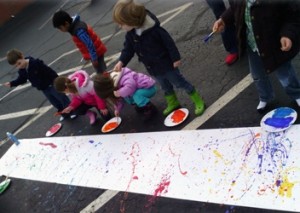 The last week we explored the Rain Forest. The children learned about the four layers of the rain forest which are The Forest Floor, The Understory Layer, The canopy Layer, and the Emergent Layer. The children learned about which animals and creatures lived in which layer. We also went over the insects and animals they would find and why they are becoming extinct. Throughout this lesson we also talked about things that we use that come from the rain forest such as wood for our furniture, fruits, coffee beans, and rubber to make rubber bands. For the preschool lesson, Ms. Ashley did awesome rain forest Art projects! We also had a very special leprechaun visit our room. The children had so much fun going on a shamrock hunt and finding all of his gold coins he left for them! 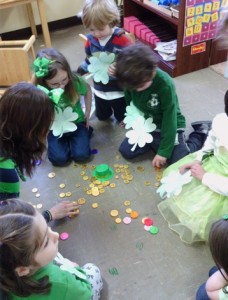