The winter months are flying by and hopefully spring will be upon us soon! This month the children have been enjoying our different themes and working hard on all of the materials and our different practical life activities!

Our first week the children learned about whales. I introduced a whale book to them and then we started a chart called a “KWL” which stands for “What We Know, What We Want to Know and What We Learned.” It always amazes me how much information the children already know about a particular subject and the questions they come up with during lessons. They are fantastic questions! Some of the questions the children wanted to know were, “How far can they swim? What are some of the things whales eat? How many babies can they have? How long are whales?” At the end of the week we had a discussion about everything we learned. For example, the Blue Whale is the largest whale and is long as a football field. The humpback whale is as long as a basketball court! The children also learned about the whales’ blowholes and how they have one baby who stays with the mom for up to a year. 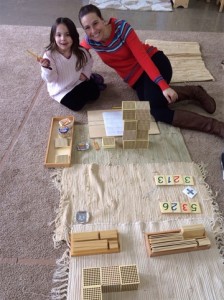 During that week the children conducted two science experiments. The first was an experiment to determine how such a heavy animal like a whale could stay afloat. This activity reinforced how salt water is denser than fresh helping objects stay afloat. The second experiment was all about blubber. We took two zip lock bags filling one with lard and then covering with the second bag. The children stuck their hand inside the bag and dipped it into ice-cold water. We observed that our hands never got cold. We discussed what blubber is and what it does for animals. The last day we discussed the different types of whales such as the Toothed Whale, Baleen Whale, the Blue Whale, and the Humpback.

The second week sparked a lot of interest in the children. We learned about Dr. Martin Luther King Jr. We began with an activity called “Being Treated Equally.” Before I lead the discussion I passed out a snack to just the boys ONLY. I then started reading the book, “Happy Birthday Dr. Martin Luther King.”All through the book the girls were wondering why I wasn’t giving them any snack, and a few became upset. I didn’t explain to them why I did what I did until the story was over. I then asked the girls how they felt not receiving a snack. Sophia said, “I really felt left out.” Another child yelled out, “I felt mad when you didn’t give us anything!” I then shared that a man named Martin Luther King stood up so that all were treated equal! I loved this activity because I think it really got the children interested in who he was and what he stood for. 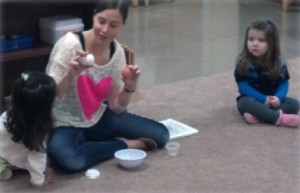 The second activity was called, “We’re all the same on the inside.” This was a simple exercise on how we can look different on the outside, yet are the same on the inside. I first showed the children a brown egg and then a white egg. I asked them to describe what they saw. I then asked what they thought each egg woul look like on the inside. Almost all of them said the brown egg would be brown in the inside. I then cracked open both eggs and the children were amazed to see that both eggs looked the same. After the activity we talked about how all of us look different on the outside but we think and feel the same things on the inside! It was an awesome activity!! The next day we discussed Rosa Parks and the bus boycotts, freedom marches, sit-ins, and the civil rights movement. We also listened to a song called “We Shall Overcome,” a powerful song about what Martin Luther King wanted for himself and others. After the song, we brainstormed some hardships or changes they have overcome or will have to in life. Next we completed “I have a dream hand prints.” The children dipped one hand in brown paint and the other in pink paint and then made prints looking like two people who are holding hands. We then placed a heart in the middle of the hand print. Afterwards the children wrote down the dreams that they have. On the last day I showed a clip of the “I Have a Dream” speech. After the speech we discussed what was said and what he wanted in life. It was a powerful week! 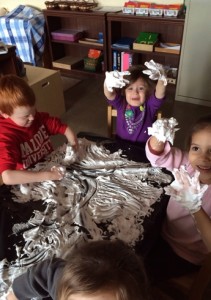 The third week we discussed Alaska and different types of Polar animals. The first day I came in dressed in my winter coat, boots, mittens, flashlight, a protein bar, a polar bear stuffed animal, and a map. I had the children to guess my destination. I was going to Alaska! We looked at our map and talked about where Alaska was located. I then provided Alaska coloring pages for the children to color while I read them a book about Alaska. Throughout the week the children learned fun facts about polar bears, walruses, and seals. The children learned that a walruses’ tusk are made out of ivory and are about two to three feet long. 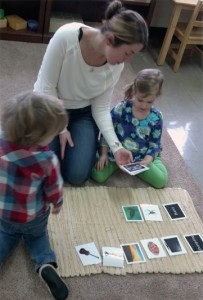 The last week was all about Penguins. The first day each child had to pick an animal name card and keep it a secret. Once everyone had a name card they were able to walk around the room and make their specific animal sound. Once the child found their partner that was making the same sound they had to stand next to each other and be silent. Once everyone found their partner, I explained to them that in order for penguins to find their partner amongst hundreds of other penguins they must call for each other and locate them by their sound. Throughout the week the children learned that the Emperor Penguin is the biggest penguin and is about the size of a six year old! They also learned that they form groups called Rookeries and only lay two eggs except for the Emperor Penguin who lays only one. We also talked about molting, why they fly, how they swim, incubation, and how the male penguin looks after the egg while the female is gone for two months hunting for food. The children loved learning about penguins!