The first week of March we learned all about insects. The children learned how to identify animals belonging in the insect category and those that do not. They learned the main parts of an insect and the preschoolers made a beautiful diagram to display in the classroom.

The kindergartners started March by learning about nouns and verbs. Nouns are people, places, and things. Verbs are action words or something you can do. We also learned that there are three articles, a, an, the.  We learned that “a” hooks up with consonants, “an” is very picky and only hooks up with vowels. And “the” is not picky at all and hooks up with anything!

In reading group, the kindergartners read a folk tale called Rabbit and Guinea Fowl Get Justice. This story was about a rabbit who did not work hard to keep his farm up, and became jealous of a guinea fowls farm that produced good fruits and vegetables. The rabbit decided to take over his farm and lie that the guinea fowls farm was his. At the end, Guinea fowl tricks Rabbit by taking his own vegetables back. This story taught a lesson about hard work, and that you can’t take other peoples things when they work hard. Along with answering questions and practicing reading aloud, the kindergartners created puppets of the characters from the story to use while acting out a scene, they drew pictures depicting what they thought Rabbit would do on his farm at the end of the story, and whether or not they thought the village chief was wise. In April, we will start a series of poems about different seasons. 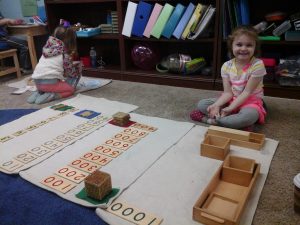 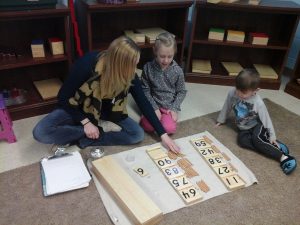 In the month of March we enjoyed our skittles experiment! We did a skittles science experiment that was very simple. We set up skittles around the edge of a shallow bowl in a rainbow order, then we added about a 1/2 inch of warm water. The skittles started to dissolve pretty quickly because skittles are made of ingredients that are prone to dissolve in water. At first this made a skittles rainbow but eventually all the colors blended together to make brown and the skittles were totally dissolved.

To kick off the month of March, the students made a sun catcher with the image of a sun. Ms. Michele drew inspiration from an artist named Don Drumm, a local artist from Akron. He creates sculptures and pieces of artwork using the image of the sun. To create the sun catcher, the young artists drew the sun first on tracing paper, and then they used primary colored paints to blend together to make rainbow colors. The paint was a tempera and glue mix to make the paint thicker and bolder. This was a great reminder that spring will be around the corner. To end the month, Ms. Michele had the students build a small pallet out of Popsicle sticks to create a base for their sculpture. Then, they were given small pieces of wood in different shapes and sizes to glue on the pallet. After the glue dried some, Ms. Michele reviewed the term monochromatic (one color) with the class, and allowed them to choose one color of paint to paint their sculpture.

This last month Ms. Lisa taught the students some new songs about character building. We talked about what it meant to tell the truth, what it means to forgive, and how to share. After the discussion Ms. Lisa taught them the new song for each characteristic. Some of the new songs had sign language to go with the words, which the students enjoyed learning. Throughout the month, the students gained experience playing tambourines, bells, maracas, and rhythm sticks.  In music class the young musicians were able to sing some classics such as, Skinnamarinky Dinky Dink and John Jacob Jingleheimer Schmidt. 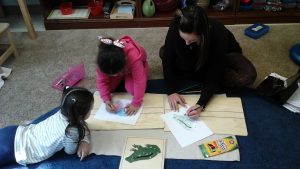 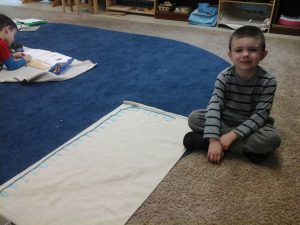