We kicked off January by talking about all the different polar animals. The children enjoyed waddling around the classroom like penguins. Sorting different arctic animals and moving across the room like they do. The kids even got to use our scooters to swim through the water like penguins hunting for fish.

The second week in January we learned all about ocean animals. We learned about things that exist in an ocean habitat like sand, small shells, smooth stones, seaweed, coral etc. We had fun creating a Venn Diagram to discuss the similarities and differences between whales and sharks. The kids also discovered there are different zones of the ocean and different animals live in each. We sorted animals that live in the ocean from animals that live on land. The kids had the opportunity to enjoy a game of sharks and minnows.

After having Martin Luther King Jr. Day off we talked about how he was a hero because he was brave and honest. We shared who are heroes are and who we’d like to be like someday with the most popular answers being either Mom or Dad. We discussed how MLK made a speech and worked hard toward peace because back then people were treated badly if they did not have the same color skin. Each child made a picture of what their dream was and wrote about it. The kids helped create a friendship heart, a “Peace Dove” and a hand print peace sign for the classroom.

The next week we talked about tigers, lions, chimpanzees, kangaroos, elephants etc. Some of our friends even invited their favorite zoo stuffed animals to school to spend the day with them during work time, line time, recess, lunch and snack. We took turns playing Build a Penguin game which taught us how to count, visually match, take turns, and the different parts of a penguin. The kids made peacocks out of construction paper and a coffee filter, which turned out really cute. We enjoyed learning what creatures would be in our students’ zoo if they ran a zoo.

The kindergarten students worked hard on learning both static and dynamic addition and multiplication using the golden beads. They have even started working on more abstract materials like the stamp game and dot board to solve problems.

The kindergartners finished up a story called Lion and School. This a story of a lion who wants to go to school with a little girl. He ends up helping her stand up to some bullies. After every reading, the group participated in an activity. They got to create a lion mask and then acted out a scene from the story. The kindergartners drew a picture of where they would like to take the lion, and they had to draw a picture of how the little girl acts on the playground after the lion has left.

The next story we read together was Coyote Rides the Sun. This is a Native American folktale about why the coyote’s tale and back are black. The coyote wants to be the chief of the animal people and thinks by riding the sun, they will respect him and make him chief. The kindergartners got to draw a picture of the coyote riding the sun, and why the coyote was able to ride the sun. For the last day, the students got to pick an animal from the story to pretend to be. They held a village meeting to vote whether they were going to make the coyote their chief or not, and what their reason was. 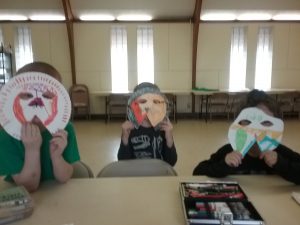 We conducted a blubber science experiment by first putting our bare hands in a bucket of ice water. Then we made a blubber glove using Crisco and Ziploc bags, when we placed our hands back in the ice water with the blubber glove on the fat from the Crisco protected the kids skin from the cold. This is how we discovered that whales, seals and walruses all have a layer of fat called blubber to insulate their bodies from the freezing water.

We made waves in the bottle and discovered that on our planet waves happen when our earth spins on its axis and water is pulled by gravity across the geological formations of the ocean floor. When we moved the bottle we got to see the energy move through the water to make waves, just like out in the deep blue sea! 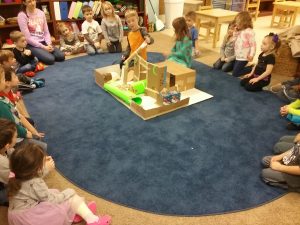 We did more experiments with surface tension by taking two pennies, one with a drop of dish soap on it and the other with nothing on it. We placed drops of water on the pennies to see which penny could hold more water. We discovered that the plain penny was able to hold much more water than the dish soap penny did. This is because the plain penny had a higher surface tension, so the surface is “stronger” and could hold together a larger number of drops Adding soap to the top of the penny lowered the water’s surface tension so the drops becomes weaker and broke apart sooner and easier. 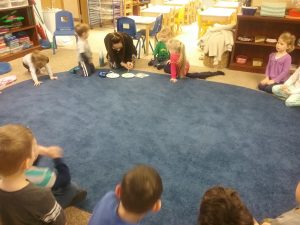 In January, the young artists were able to experience creativity with clay. To start their creative juices flowing, Ms. Michele showed the class pictures of imaginary creatures such as, Centaurs, Griffins, and a Pegasus. The students then picked two or three pictures of animals they wanted to combined, and drew a made up creature, or imaginary creature as Ms. Michele calls this activity. The next week, student formed an armature out of foil, which is the inside part of a sculpture to create the body. Now it was time to get their hands on some clay. Ms. Michele showed them how to make some basic forms called a coil, which looks like a snake, and a slab, which looks like a flat, round, disk. Then the students smoothed the clay over their armature to start forming their creature. Once the armatures were covered, the class was able to add details like feet, wings, tails, and ears. Ms. Michele backed the creations, and the next week the young artists painted their imaginary creatures with tempera paint. This is always the best part, because we really see their creations come to live with colors. When everyone was finished, Ms. Michele gathered everyone in to a circle and the students shared their creature. They shared the creatures name, where it lived, and what the creature eats with the class.

On the last class of the month, Ms. Michele started a paper-weaving project. Students colored strips of paper, and then weaved them onto a large piece of paper. This project is great practice for fine motor skills, concentration, and hand-eye coordination.

Thank you Ms. Michele for your hard work, and creativity for our students. We are always excited to go to art class and to learn different art techniques.

This past month in music class, Ms. Lisa shared the story of Peter and the Wolf by Sergi Prokofiev.  The story is a musical symphony that was commissioned by the Central Children’s Theatre in Moscow in 1936. Each character in the story is represented by a different instrument; the flute is used to copy the sound of the bird, the cat is represented by the slinking sound of the clarinet, the oboe plays a smooth sound that reminds the listener of the duck swimming gracefully on the water, the character of Peter’s grandfather has a bassoon which plays low and slow notes, and the hunters’ melody is loud and in a marching tempo with the woodwind instruments and timpani drums. Now the villain of the story, the wolf, has a sharp sneaky song that is played with the French horn, and last but not least, Peter, who is the hero, has the stringed instruments to play his triumphant and heroic theme.