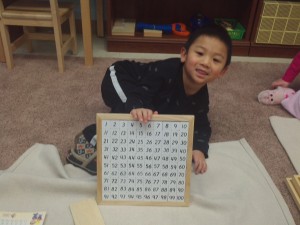 We kicked off January by talking about polar animals. The children enjoyed making fake snow out of hair conditioner and baking soda and playing in it to build snowmen, igloo’s and snowballs. The students also enjoyed waddling around the classroom like penguins.

The second week in January we learned all about ocean animals. We learned about things that exist in an ocean habitat like sand, small shells, smooth stones, seaweed, coral etc.

After having Martin Luther King Jr. Day off we talked about how he was a hero because he was brave and honest (noble). We shared who are heroes are and who we’d like to be like someday with the most popular answers being either Mom or Dad. We discussed how MLK made a speech and worked hard toward peace because back then people were treated badly if they did not have the same color skin. Each child made a picture of what their dream was and wrote about it to create a class book for the library.

The last week in January we took an imaginary trip to the zoo and sang all about the tigers, lions, chimpanzees, kangaroos etc. Some of our friends even invited their favorite zoo stuffed animals to school to spend the day with them during work time, line time, recess, lunch and snack.

The kindergarteners have been working so hard on their journals. I hope you enjoyed the ones they brought home! They also started practicing writing in cursive. I can’t believe how they cruised through learning addition and multiplication with the golden beads. We have even been working on more abstract materials like the stamp game and dot board to solve our problems.

For the first week of January we were curious to see what salt would do to ice so we froze a block of ice. Then took turns placing spoonful’s of salt onto the ice. It was interesting to watch the salt create holes in the ice. After the holes were created we took turns dripping primary food colors into the holes and the colors mixed together to form new colors.

We made waves in the bottle and discovered that on our planet waves happen when our earth spins on its axis and water is pulled by gravity across the geological formations of the ocean floor. When we moved the bottle we got to see the energy move through the water to make waves, just like out in the deep blue sea!

Milk goes great with a lot of things: cereal, cookies, cake, and pie. So we decided to mix it with a bottle of coke. The milk and coke separated when the phosphoric acid molecules attached to the molecules of the milk which increased the density and separated them from the rest of the liquid. The remaining liquids had less density than the phosphoric acid and milk molecules so they float on top.

For three weeks of January the students worked to create an imaginary creature with Ms. Michele. This project is always enjoyed by the students and brings more whimsy into the classroom. To start the lesson, Ms. Michele talked to the group about mythical creatures and showed some examples of artists’ renditions of the creatures. After this, each child got to pick three pictures of animals and had to choose one part of each of the animals to use in drawing a new creature. The next week, the students then got to create an armature out of foil, which is the base structure for their sculpture. Once the armature was in place, the young artists formed clay around the foil and the creatures began to come to life. After the clay animals were baked, the class got to paint their creatures. The students loved making up their own creature and letting their creativity soar. To end the month, Ms. Michele started a new series where each week she will introduce a new artist and we will complete an artwork in the style of the individual. The first artist we learned about was Claude Monet, who is very well known for the Surrealism movement. Surrealism style is soft and blurry, which some believe to be caused by Monet having poor eyesight. To recreate this style, Ms. Michele had the students use their fingertips to make dots of different colored paint all over a piece of paper. Once the colors were blended together by their fingerprints, it created a blurrier look just like Claude’s. We are all in suspense to find out who the next artist Ms. Michele will introduce us to next week!

This past month in music class, Ms. Lisa shared the story of Peter and the Wolf by Sergi Prokofiev. The story is a musical symphony that was commissioned by the Central Children’s Theatre in Moscow in 1936. Each character in the story is represented by a different instrument; the flute is used to copy the sound of the bird, the cat is represented by the slinking sound of the clarinet, the oboe plays a smooth sound that reminds the listener of the duck swimming gracefully on the water, the character of Peter’s grandfather has a bassoon which plays low and slow notes, and the hunters’ melody is loud and in a marching tempo with the woodwind instruments and timpani drums. Now the villain of the story, the wolf, has a sharp sneaky song that is played with the French horn, and last but not least, Peter, who is the hero, has the stringed instruments to play his triumphant and heroic theme. The students enjoyed the story and learning about the different instruments and their sounds. I was amazed at how well the children could recall which instrument played for the different characters each week. Peter and the Wolf is a very exciting symphony, which captivated the students’ attention and was able to expose the group to many different instruments.