December was filled with many fun winter and Christmas activities.  We started the month off with focusing on practicing our songs for the Christmas program.  The students worked very hard to memorize the lyrics and to get the motions and dance moves down just right.

The students created paper plate Santa Claus. Along with a Rudolf picture by tracing the students’ hands for the antlers and feet for the face, then we added a red nose and eyes to complete the reindeer.  The students also made a paper Christmas tree. We enjoyed baking and decorating sugar cookies. They loved making candles and melted snowmen ornaments to put in their gift bags to their parents. This year, we are super exited for our Christmas Party, we are planning to hire a real beard Santa!! 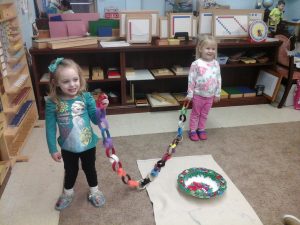 We all enjoyed the students’ show and tell items and they enjoyed sharing with the class. The children especially had fun wearing their pajamas to school and watching classic Christmas movies like The Grinch, Frosty, and Rudolph. 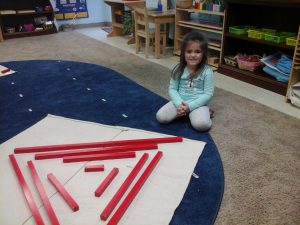 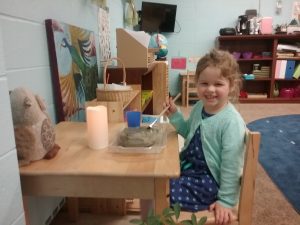 The kids did an amazing job at the Christmas program and were the cutest snowmen and women ever!

I hope everyone had a wonderful break and a Merry Christmas! See you next year! 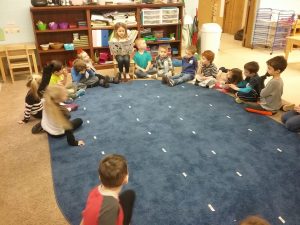 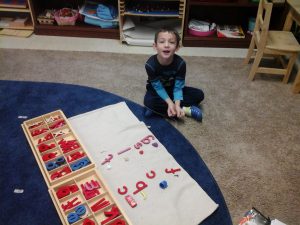 The kindergartners learned how to measure in inches and centimeters using a ruler and tape measure. They even had the opportunity to have special lesson from a parent who showed them how to scale down the solar system and use inches to show the distance between each planet. 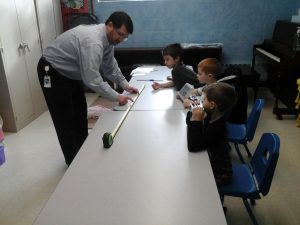 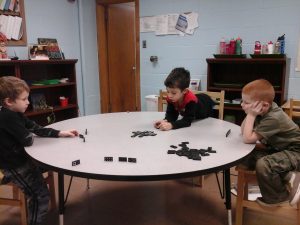 The kindergartners have been working very hard on completing journal prompts on their own using letter sounds and sight words. 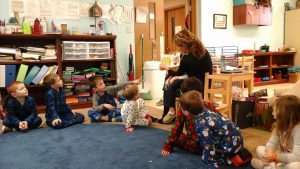 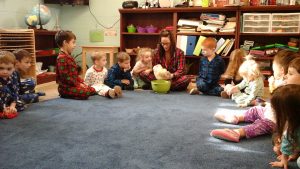 In December, The kindergartners finished the series of poems with a poem called, The Lobster Quadrille. A quadrille is a type of lively square dance, which we all learned how to do! While I read the poem, the kindergartners clapped a beat and danced. After a few tries they caught on, and had a blast with the square dance. They learned some new vocabulary: porpoise, shingle, and askance. During the second reading, we had a discussion that analyzed the poem. The kindergartners had to think about why the characters in the poem made certain decisions, and what they think the character should do. The students also completed an art activity where they had to draw a picture of their favorite ocean animal. At the end of every art activity, the students take turns sharing their drawings.

The next story we started is, Lion at School. This is a story of a little girl who does not enjoy going to school. She starts of to school one day late, and is not in a hurry to get there. On her way she meets a lion. This lion can talk and wants to go to school with her. They come up with a plan to tell the teacher that the lion is a friend and his name Noil. He joins her for the morning portion of school, and helps her stand up to an older student. In response to the story, the kindergartners drew a picture of where they would take a lion. After Christmas break, we will resume reading group, and finish Lion at School.

Our students love our experiments and this month the favorite was our snow….
The students wanted to play with snow but since it hadn’t snowed yet, so we decided to make our own. We combined corn starch and white hair conditioner!  Who knew Science could be so much fun!

During December, Ms. Lisa created a festive atmosphere to gear the students up for the holiday season. We sang some Christmas favorites such as, Rudolph the Red Nosed Reindeer, Jingle Bells, Feliz Navidad, Jingle Bell Rock, and Deck the Halls. While we sang Jingle Bells, the student played bells to replicate the sound of the horses dashing through the snow while pulling the sleigh. The young musicians also used castanets, which are Spanish instruments that make a clicking sound, during the song Feliz Navidad. Ms. Lisa played games with the students where she would play a Christmas song and the students had to dance; once she stopped the music, students had to freeze. If they didn’t freeze, they were out. This is an enjoyable way for youngsters to learn listening skills, and to control their response time. To end the month, the class reviewed some musical terms that name the tempo of a musical piece. These terms are Allegro (fast), Adagio (slow), and Andante (medium). To reinforce the lesson, Ms. Lisa played a song called The Christmas Train, where the tempo changes from fast to medium then to slow. The students walk around in a train, and use egg shakers to make the sound of the train moving while Ms. Lisa played a triangle for the bell, and used a whistle for the train’s whistle. They had to move at the same tempo that song played. The students enjoyed walking in slow motion, then walking quickly on tiptoes. I’m sure the students are in the holiday spirit after all the great activities they participated in during music class! 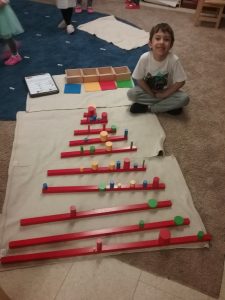 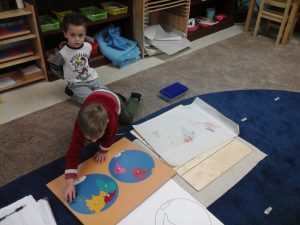 This past month was filled with many wonderful winter and Christmas activities. In art we started a fun imaginary project called Imaginary Creatures. Ms. Michele shows the students different made up creatures such as a Pegasus, and a Griffin. These animals are made up of multiple animals combined. The students then got to pick pictures of three different animals. The young artists had to combine features of the animals and draw their new creature. After the drawings were done, the class got to color their imaginary animals and draw a habitat. Once everyone was finished, we all shared our animals and told where they lived and what the creature ate. Once we come back from Christmas break, the students will form their imaginary creature out of clay to bring it to life! Our last project of the month was a Christmas painting of Rudolph the Red Nosed Reindeer. Ms. Michele showed us how to paint Rudolph step by step. The students picked which type of patterned paper they wanted, and then we got started. Ms. Michele showed us which shapes to make first, then painted the shapes in to create a rendition of the beloved Christmas character. Their paintings are hanging up in the entrance, so make sure to check out the students’ wonderful paintings!