We started April off by talking about butterflies and caterpillars. Students had a blast learning about how butterflies go through stages of growth and change called a life cycle. They even got to create a butterfly mobile to represent each stage of the life cycle they learned about. We also designed butterflies using paper, pipe cleaner, and creativity. For science we put one empty glass of water and one full glass of water next to each other with paper towel we twisted together  until it formed a rope (the wick). The rope absorbed and transferred the water from the full glass into the empty glass after we placed one end of it into the glass filled with water and the other into the empty glass. The children learned that the process they just watched happen is called capillary action which is when water uses the tiny gaps in the fiber of the paper towels to move along. Later, some of the children asked if this is the same thing that happens in plants and flowers. What a proud moment that was as a teacher!

The rest of April we focused on the seven continents: Asia, Africa, North America, South America, Antarctica, Europe and Australia. We learned Africa, is where the elephants, giraffes and lions live. South America has tropical forests and one of the longest rivers in the world the Amazon River. North America is where we live. Europe and Asia are together on the map, but Australia is an island where the kangaroo and koala bear live. Last but not least Antarctica is way down below frozen and also home to the penguins. Students and teachers spent a lot of time preparing for this year’s International Festival, displaying some of the knowledge we learned throughout the month. They did a wonderful job, we are very proud of them!

I would like to send a Big Thank You to everyone who took the time to come and talk to us about places around the world. The children really enjoyed listening to what you had to share and appreciated all the time and effort you put in to preparing for the visit! 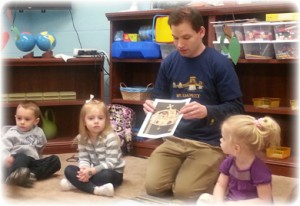