At the end of the third month of school my classroom is running like a well oiled machine. Children are advancing nicely in math, reading, and their social skills. Dana, Kathleen, and I are pushing for more “Thank Yous, Pleases, and You’re Welcomes.”   When we call a name we are expecting a “Yes, Ms. Kathleen or How can I help you Ms. Dana?” rather than “What? or Ya?” I want to tell the parents of the older children in the classroom… “Be Proud!” They are taking a leadership role like I’ve never seen. They are helping younger children and helping each other with more challenging work. I wanted to once again thank Dana and Kathleen for their hard work and dedication. They step up and just do what needs to be done without me asking. 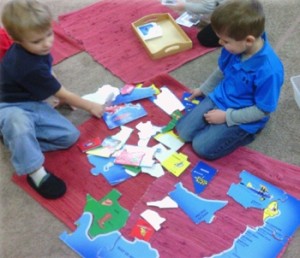 After learning about the five major classes of animals at the beginning of the month, we looked at some creepy crawlers. We studied insects and arachnids. These were the first animals that were not classified as vertebrates instead are called invertebrates. We discovered most have an exoskeleton. We now know insects have six legs, a head, thorax, and abdomen and arachnids have eight legs. Also, students learned all bugs are insects but not all insects are bugs!!! 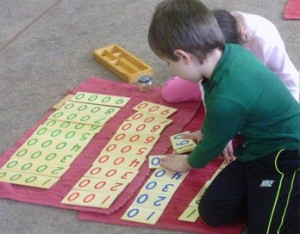 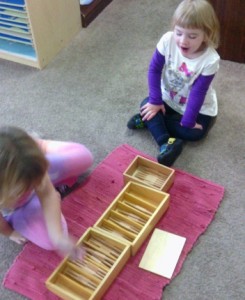 Next, the class went back in time and studied dinosaurs. We learned the names of 5 dinos (T-Rex, Triceratops, Stegosaurus, Pterodactyl, and Brachiosaurus) and if they were meat eaters (carnivores) or plant eaters (herbivores). We learned when they lived and I introduced the phrases “extinct” and “fossils” what they meant. We read “Dad is a Dinosaur”, and Dinosaurs go to School”

We then learned about Pilgrims and Thanksgiving. Students worked on a craft where they wrote what they were thankful for on feathers. The feathers were put on turkeys that we placed on the bulletin board. Hand print turkeys and pilgrim hats were also made for the holiday. 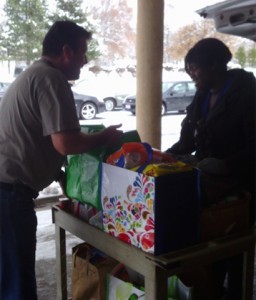 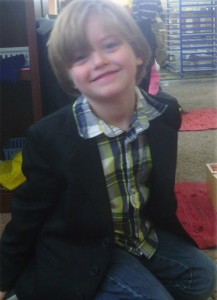 Our final week in November, which was a short week, I managed to slip in a “lesson” on Buckeye Football. It was appropriate since “THE GAME” was that Saturday. If your child hears someone shout O-H they will give a resounding response of I-O! They know Hang On Sloopy is the official rock and roll song of Ohio and will yell O-H-I-O and do the hand gestures as they sing the song. We watched several Ohio State Buckeye video highlights and the children especially loved “Script Ohio” 42-41 Go Buckeyes!!! 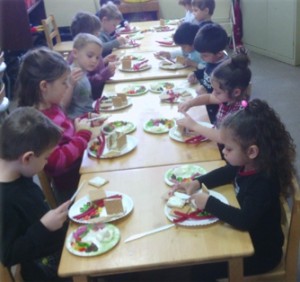 We spent the majority of our group time together in December practicing for our Christmas program. Our little reindeer performed nicely. My big reindeer did a fantastic job getting our students ready for the show! 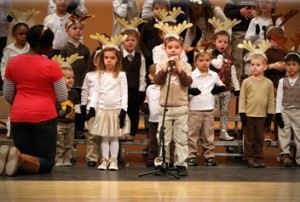 We can count to ten in 15 different languages. We can count in English, Spanish, Sign Language, German, French, Japanese, Greek, Arabic (with the Lebanese dialect), Italian, Russian, Romanian, Swedish, Tagolog, Hebrew, and Korean.

The kindergarteners are learned how to tell time. We ended our section of telling time by learning how to tell time to the minute. We have done many worksheets, use flashcards, and use a toy clock with moveable hands to help us learn to tell time. Then we delved into everyone’s favorite thing…money. We learned about coins. What they look like and how much they are worth. The kindergarteners learned how to count coins when presented with multiple coins of different denominations. We went over bills including the ever elusive two dollar bill. We ended November with learning the parts of plants, flowers, and leaves. In December the kindergarteners discovered the ruler. They first learned to measure lines in inches and centimeters and ended up measuring things around the house. 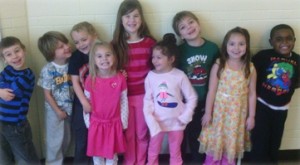