I Want To Be Sedated…

Why is that old Ramone’s song going through my head?  I don’t know.  Is it because after three months of Summer hibernation, staying up late (by late, I mean 10 pm, woo hoo) and sleeping in (to 7:30am, woo hoo again), binge watching TV shows, living life at a snail’s pace, and having minimal work responsibilities, I am thrown into going to bed at 8 pm, waking at 5 am, wondering into the building at 6 am.  I await for the rush of students descending upon the school. The student part I love, it is my sleep schedule that has me a little cheesed off.  But, the truth is, I would not have it any other way!

We then learned how to keep our bodies healthy.  We wash our hands to get rid of the germs.  Everyone has germs on them but they are sooooooooo small you can not see them but they are still there.  We cover our sneezes and coughs on the inside of our elbows.  Eating healthy is important just as exersising, getting enough sleep, and brushing our teeth. Eating a healthy diet was a good segway into tour next lesson on food groups.  We learned about grains/cereals, fruits/veggies, meat/protein, dairy(my fave), and sweets/fats. Since we all need to eat to “live” we talked about what it is that makes a bird living and my shoe non-living.  We discussed that living things eat/take in nourishment, breathe/exchange gases, grow, and reproduce. After our lesson on living things we moved on to discussing the different kind of animals there are.  We started with the mammal because WE are mammals!  We are warm blooded, vertebrates, have hair or fur, are live bearers, and we drink mother’s milk when young (not pizza or pop tarts)!

Some of you may not be aware, that Absorbent Minds Montessori School has a relationship with the University of Akron where we have student teachers observe and, in my class, they participate in the daily activities in my room.  I had the pleasure of having another enthusiastic student visit my room this month!

All in all this was a great start, to a great year, with great children!

Our Academic Enrichment time is daily from 12:00-1:00pm.  This time is specifically designed for our Kindergarten students to join together as a group to work and progress through the advanced materials and lessons in the Montessori primary curriculum. Throughout the school day in their classroom they are still working individually with their classroom teacher on these and other materials at their level.

The first week of school, the kindergarten students started out learning about the these things called continents. There are seven of them and each has a fun fact and countries within them.  Did you know (without googling) Central America is not a continent?  My kindergarten students do!  Next we discovered that the Earth has something called cardinal directions(North, South, East, and West) or N,E,S,W=Never Eat Soggy Waffles.  We went further and found you can get more specific directions by stating something is northeast, or southwest.  With that under or belts I told the students that there are two imaginary lines that are on the Earth.  The Prime Meridian and the Equator.  If you go where these two imaginary lines are you will NOT fine a painted line.  But these lines have a purpose to divide the Earth into hemispheres.

We took a closer look at North America(because this is continent in which we live).  We discussed the three major countries of Mexico, USA, and Canada, the location of the Great Lakes, Gulf of Mexico, Pacific and Atlantic Oceans, and Hudson Bay.  Since we live in the state of Ohio we learned some fun facts about this great state.  The official things such as the bird, mammal, and fossil to name a few.  The K-Kids now know the surrounding states, their nickname, and abbreviation.  Ending the month we broke down where we live from biggest to smallest….  From the galaxy of The Milky Way to our individual street addresses (street not email). And everything in between!

The children love, love, love their Music, Science, and Art classes! Their faces shine with anticipation and glee every time, yet they are also full of attention towards their teachers, and their lessons. I am also happy to be an observer in these classes.

MUSIC: In Music class the children learned words such as solo, choir, director, adagio (slow), allegro (fast). They learned about high pitch and low pitch. The children loved doing different movement activities using their own bodies, as well as scarves and musical instruments such as a maracas, tamborines, bells, egg shakers, and castanets. They also heard a beautiful piece of music by Beethoven!

SCIENCE: In Science the children did three experiments they tremendously enjoyed! These were Magically Inflating Balloon – ” Chemical Reaction” (The balloon slowly filled with “air” (carbon dioxide) from the bottle), Density – “The mass in a specified volume” (The egg in saltwater floated. The egg in freshwater sank), Density – “The difference in the weight of two objects of the same size” (When shaking the bottle it appeared to mix, but as it settled, the oil and water separated and oil rose to the top). What fun the children had! 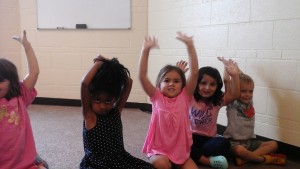 l
ART: The children learned about their primary colors – red, blue and yellow, as well as their secondary colors – orange, green and purple. They love, love, love to create using the different materials provided by Ms. Michele, including paint and different colored papers. The children learned about artists such as Mondrian, Van Gogh, Beatrig Milhages, and Don Drumm, who himself is from Akron! Patterning was also a skill learned by the children this month.
Do talk to your children about all the fun, new things they have learned this month in Music, Science and Art!