Summer flew by and this school year feels like it is flying by since September has come and gone. The beginning of the school year is always exciting. I love seeing old faces and welcoming new students and their families. This year’s starts with many new students and many young students but I am pleasantly surprised that the classroom is full of well behaved and eager learners. Line time is running smoothly. 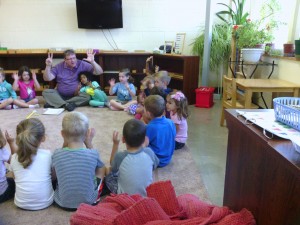 After the students walk the line and sit for line time I see “criss cross applesauce” (legs folded in a pretzel), doopas on the line, safe hands and bubbles (hands folded in laps and ready to listen). I usually say in a “fake” mean voice “What is wrong with this picture!” And the children delightfully reply “NOTHING!” What a joy to see that in the first month of school. I want to thank Dana and Kathleen for everything they do. 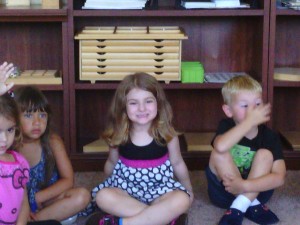 The first two weeks we went over ground rules such as walking in the classroom, having listening ears, keeping our hands and bodies to ourselves and treating the classroom (children, teachers and materials) with respect. We then delved into healthy habits. We now know why it is important to wash our hands and body, brush our teeth, exercise, and get enough sleep, and, eat right. 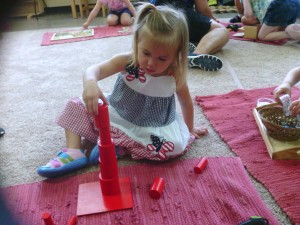 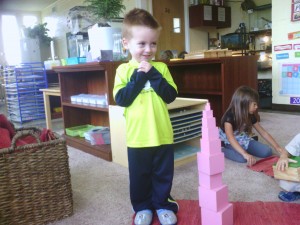 Healthy eating was a good segway into the next week lesson which was food groups. We learned about grains and cereals, fruits and veggies, meat and protein, dairy and fats and sugars. We identified what foods were in each food group and how many servings to eat each day. 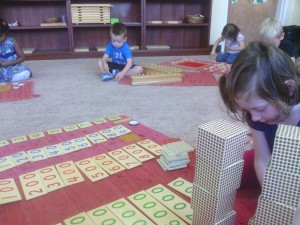 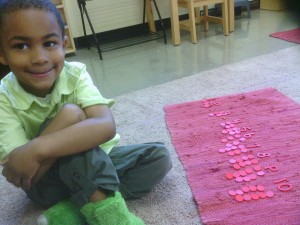 We capped the month with learning the characteristics of and determining what is living. All living things reproduce or have babies, eat or take in nourishment, breathe or exchange gas, and grow. The students determined that I am living but my shoe is non living. Also, Kathleen and Dana are living but their walky talkies were non living. Our student teacher from the University of Akron presented a lesson of living and non living which kept the children engaged and happy. We determined that plants were living things since they met all the criterion. 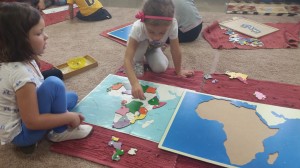 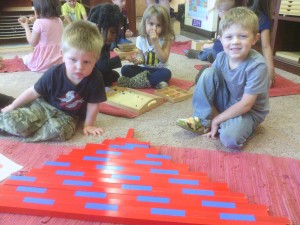 Cultural Subjects We now can count 1 to 10 in eight different languages (English, Sign Language, Latin, Spanish, German, French, German, and Greek). I wanted to add I do not make it to many concerts but I had the pleasure of seeing “Wilco” this month. A few reasons why I mention this is that the front man, Jeff Tweedy, lives across the street from my sister in Chicago. I talk to him every chance I get and he is a pretty cool guy. So if you ever want to play six degrees of separation from Jeff Tweedy I am your in. Also, he sent all of his children to Montessori school. Academic Enrichment Class: The elders of the school got a blast of geography this month. We learned what the seven continents were, where they are located, a few fun facts about each, and a few counties that are located in each continent. We moved on to the cardinal directions, identifying where the equator and prime meridian are located. The k-students learned the equator and prime meridian create sections called hemispheres. Of course we discovered what continents are in what hemispheres. Ending the month was learning what states are adjacent to our home state of Ohio. We learned where the states are located, what their nicknames are, and their abbreviation. We researched further the facts of Ohio. The “official” things. They are as follows The official Tree: buckeye, Bird: cardinal, Insect: lady bug, Flower: scarlet carnation, Fossil: trilobite, Drink: tomato juice, Rock and Roll song: Hang On Sloopy… O-H-I-O! We can count to ten in 10 different languages (English, Sign Language, Latin, Spanish, German, French, German, Greek, Japanese, and Arabic w/ Lebanese dialect) Enrichment Corner: Welcome back Ms. Lisa! The school year is officially in full swing and the children here are Absorbent Minds are so happy to be in music class again. Ms. Lisa brought her friend Wilma the whale to help us remember musical terms for fast and slow. Lots of our returning friends remembered right away and our new friends caught on quickly. We learned how to work as a team playing five little monkeys, the hokey pokey, and I’m a little tea pot. Looking forward to a year of great music and fun times. 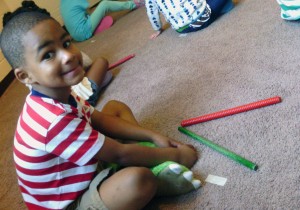 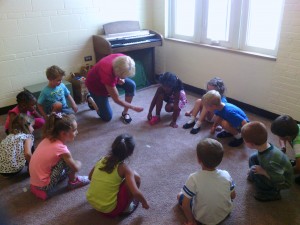 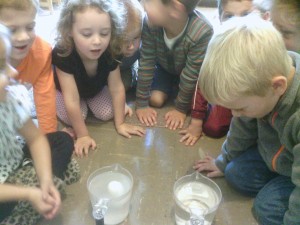 Our next experiment included eggs, salt water, and fresh water. We wanted to find out what would happen to an egg put in salt water and an egg put in fresh water. Would the egg float or sink? Many of the children guessed that either the eggs would float or sink. The children took turns placing eggs into each water. Each time, the egg placed in salt water floated, and the egg placed in fresh water sank. Mr. John explained the concept of density. The salt water was more dense so the egg was pushed to the top. The fresh water was less dense so the egg sank. There was nothing to push the egg to the top. In art class, we first learned what an artist was and what they do. Ms. Michele asked if certain things in the classroom were types of art. Our first artist we learned about was Eric Carle. The children learned that Eric Carle is an author who illustrates his books by making tissue paper collages. What is a collage? A collage is a picture made up of other pieces of paper and other pictures. Ms. Michele showed the children different textures and how to rub them onto tissue paper to make different designs. Once the children had their textured tissue paper, they glued them down to make an animal like Eric Carle. 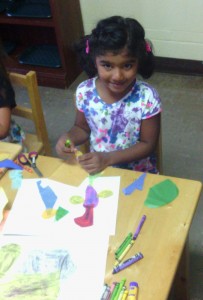