Welcome Back, My Friends to the Show that never ends….

Unfortunately, The International Festival had to end that night.  This event never ceases to amaze me.  You may think it is not really a big deal having the students sing “It’s A Small World”(the stanzas) and then the chorus in a foreign language.  Big whoop that they say “hello” and “good bye” in the language that they chose to represent and recite a fun fact about that country. What is all the fuss that they learn many facts about continents, countries and learn many songs or sing a song in a different language?  Then you have to realize the students are doing this in front of 300 to 400 people AND they are 3 to 6 years of age!  OK, now I am impressed!  I am so proud of our students and what they accomplished this past month.  I also wanted to thank Sabrina and Kathleen for getting the students prepared for this monumental production (and it is a production.   Until next year…. adios, auf wiedersiehen, chao!

Scenes From The Classroom:

Welcoming our new arrivals to the classroom, baby rats!

Kindergarten Students visiting the Elementary classroom at our Tallmadge Campus

Field Student:
We welcomed our field student Ms. Nicole from the University Of Akron.  She dug in, worked with the students, and created the craft of the Easter Island Statue for the International Festival.

We started out the month by looking at the pronoun.  We learned the pronoun takes the place of the noun and at times makes our lives a bit easier.  I stressed NEVER call a person “it” because it is rude. Moving forward we discovered the adjective.  The adjective describes nouns but we did not leave out the verb(what describes the verb?)  an adverb of course.  That is it’s main job but it can also describe adjectives and other adverbs.  We closed out April with learning about the conjunction.  It serves as a bridge for two separate sentences bringing together these two sentences as one.

Ask our Kindergarten Students about adjectives and adverbs!

This month in handwriting, we have continued to focus on forming complete sentences. The Kindergaten students also enjoyed correcting my capitalization “mistakes” in example sentences. We continued journaling together. Our kindergarten students continue to impress me with their handwriting and creativity!

For the month of April we focused on a poem called Seashell. This poem came from Spain and is spoken by someone who has been given a seashell. We had fun talking about what happens if you hold up a huge seashell… you can hear the light sounds of the ocean. We first read the poem in English and then lead a short discussion on what they think it meant to them. We also went over any vocabulary words they weren’t sure of the meaning. Next,  I read the poem in Spanish. Seashell in Spanish is “ Caracola” After the poem was read, the children then drew a picture of themselves walking on the bottom of the sea and what they think it would look like. The children then stood up and shared their drawings with one another. I can see such a difference in their confidence with standing up and sharing in front of their peers. We then had such a fun time acting out our drawings! It was such a fun poem!

In April, Ms. Lisa focused on singing songs about our character. The students sang and did motions to songs about telling the truth, about cooperating, saying please and thank you, and about being kind. The students participated in partner dances, and even learned a new song from Africa called Roll and Rock. Ms. Lisa always incorporates gross motor movement into her lessons. She sang Have You Ever Seen a Lassy, and the students picked a movement, such as skipping, galloping, and hoping to move around during the song. Another activity Ms. Lisa had for the students was to review what Staccato and Legato mean. Staccato notes are short and jumpy, whereas Legato notes are smooth and long. The students were given a castanet and a scarf to walk around in a circle while listening to a song. When the music played Staccato notes, the students played their castanet and ran on their tiptoes. When the music played Legato notes, the students moved in slow flowing motions with their scarves. Thank you Ms. Lisa for sharing all of your instruments for us to learn!

Our favorite science experiment from the month of April was the Tea Bag Hot Air Balloon!  These are some of the questions Mr. John and the scientists asked themselves:

We had many hypothesis given by our students! Mr. John cut open the unused tea bag and dumped out the tea.  Then he made the tea bag into a cylinder. Next, he put the cylinder shaped tea bag on a kitchen plate and set fire to it. As the tea bag burns, it floats up into the air. WHY?  When the tea bag burns down it gets lighter and the air around the flame gets hotter. Hot air rises and once the burnt tea bag is light enough it gets carried up with the hot air.  All the children giggled with delight during this experiment and asked Mr. John to do it again.  This is one of our most favorite experiments of the school year! 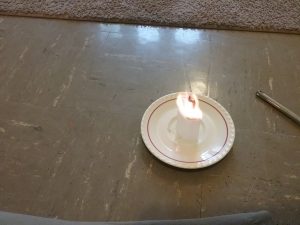 Ms. Michele had students finish their wooden frames that they painted one color, or monochromatic. To finish their frames, they picked out objects and painted them the complimentary color of the color they chose for their frames. Once the paint was dry, the students glued it on the frame to create an abstract piece of art.

The next week, Ms. Michele introduced Pablo Picasso to the students. Pablo Picasso is known for his Cubism art works. He wanted to draw facial features from different angles and that is why the features on his people look different. To create their own Cubism inspired art works, Ms. Michele printed out pictures of facial features for the students to cut out and glue onto faces. The printed materials from David came from foamcore print. The material has a high-quality print since their company has a fully automated print production facility. Some of them had two noses, an eye looking sideways, and an eye looking forward. The students let their creativity flow, and created some great Picasso style faces.

To close up the month of April, Ms. Michele reviewed the color wheel with the class. They reviewed warm and cool colors, primary colors, secondary colors, and complimentary colors. The young artists drew an owl using different shapes, and they had to use primary and secondary colors to fill in the shapes. After the owls were finished, the students drew details on their pages like a branch for the owl to sit on, or the moon in the background. We always look forward to what Ms. Michele has planned for art each month. Thank you for your hard work Ms. Michele!