May was such a busy month! Our class dove into water and learned about the sea and jumped into a space shuttle and flew into outer space. Our class also had fun learning about plant life cycles and had a blast during Grandparents Day and at our field trip to the zoo!

The first two weeks we explored the animals of the ocean. We first started by defining mammals. I explained to them that they are warm blooded and both land and sea mammals have hair on their bodies and give birth to their babies. The first mammals we talked about were the dolphin and whale. The children learned that dolphins can stay under water for 15 minutes, but can’t breathe under water so they have to come up for air. The children learned that they live in groups of ten to twelve and that there are thirty-six different kinds of dolphins. During this discussion we talked about how the Killer Whale is the largest dolphin.

The second mammal in the sea that we discussed were whales. The children learned that since whales breathe like us they can only stay under water for a short period of time and then they have to come up for air by using their blowhole on the top of their heads. They also learned that there are two types of whales: the Baleen and the Toothed whale. The children were interested in what whales ate and how fast they can swim. Together we looked through books and found out that whales can swim up to 30 mph and that baleen whales eat krill and toothed whales eat small fish and other small mammals. The last mammal of the sea we discussed was the Manatee. The children found out that manatees were first found out by fishermen who saw the long tails and thought they were looking at mermaids! The children also learned that they could weigh as much as 2000 lbs., and can swim up to 20 mph hour but usually cruise around the sea at 2 to 6 mph. Also, during that week the children made a Venn diagram about fish and mammals. The children did a great job with this activity. They knew that fish do not have lungs, but have gills instead. Mammals are warm-blooded and fish are not. That most mammals live on land, but fish have to stay in the water and both have a vertebrate. What smarties I have!!

We then focused on outer space. During this time we learned about the solar system, stars and constellations, galaxies, the eight planets, the sun and moon, the space shuttle, and the first man who walked on the moon. Wow, what a busy couple of weeks! We first stared out by creating a web of the solar system. Throughout our space lesson the children added the information they have learned onto the web. During our lesson, the children learned about the eight planets since the 9th planet is now a dwarf planet. They learned the order of the planets and neat little facts about each one. They loved learning about Jupiter and its famous hurricane like storm. They thought it was pretty cool that Mars is called the “red planet” due to the red dirt, dust and sky. We also learned about how there are thousands of different galaxies and how the spiral shape is the most common type. The children also learned about night and day. For this activity I had one child stand in the middle of the circle and pretend they were the sun. I then had another child pretend to be the earth. I explained to them that the Earth takes 365 days to orbit around the sun, but as it’s orbiting it is also rotating. The kids loved this activity!! During this time we talked about what stars are, the lunar eclipse, the different constellations, and about observatories. We then talked about Neil Armstrong and how if they went to the moon they would still see his footprint. Near the end of our outer space lesson the children learned about life in space, gravity, and astronauts. I showed a video of a launch and what it is like for astronauts up in space. The children loved it!!

We then focused on the plant, butterfly, and frog life cycles. The children learned the parts of the flower, what plants need to grow, and the purpose of the stem. We also had fun placing celery stems into dyed water to show how plants drink through their veins. We also had fun learning about the different stages of the butterfly and what metamorphosis was all about. Lastly we learned out the different stages of the frog with amazing books and videos!

Also, during this month we celebrated Grandparents Day in our classroom. The grandparents were able to come in and join us for a special line time, Science class and then a craft. It was such a special day for the children.

With the last two weeks remaining, the children had a blast learning about different insects. The children discovered that insects have six legs but spiders and other arachnids have 8 legs. The children were also able to learn the life cycle of the butterfly and find out why bees are so important to us. We also had fun discussing ladybugs and other beetles. During the last week of school the children learned about who invented ice cream, watched a video about how ice cream is made, learned all about camping. Also during the last week we had an ice cream party and a mock campout with smores! Wow what a week we had! 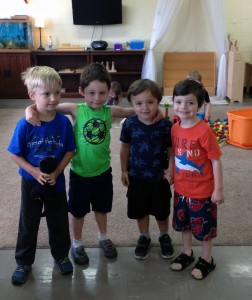 For our last month in music class, Ms. Lisa reviewed many skills we have been working on throughout the year. To review loud (forte) and soft (piano), the children played tambourines and bells during different parts of a song. We then danced with scarves to some smooth (legato) music and then popped some bubbles to jumpy (staccato) music! To practice using our listening ears, Ms. Lisa had us play a pass and roll ball game. We had to work together to keep the balls moving in circle, but had to listen carefully and stop when the music stopped! We also worked on learning whole, half, quarter, and eighth notes. Ms. Lisa had the children play rhythm sticks to “Great Big Stars” to keep the beat with the quarter notes. Another musical instrument we worked with was Ms. Lisa’s keyboard (piano). She explained to the children that the keys on the left side of the keyboard make low sounds, while the keys on the right side make high sounds. Lastly, we played the cat and mouse game to review high and low sounds. The children loved when the low sounds were played on the keyboard and the cats came out to catch the mice! Thanks Ms. Lisa for such a fun music class!

In science this month we learned that we eat metal! Mr. John mixed together bran flakes cereal and water in a bag. When he rubbed a magnet over the cereal, black spots appeared. These black spots are iron. So since iron is a metal, we eat metal in cereal!

In our first art class, we studied the artist Vincent Van Gogh. We looked at the painting he did of a bedroom. Then the students created their own bedrooms out of cardstock and other art media. In their bedrooms, the children had to create two patterns.

In our third art lesson, the children got to observe and paint flowers. Ms. Michele brought in pots of flowers and set them on the tables. She showed the children how she observed and then painted what she saw. She demonstrated how to paint stems, leaves, and then flowers. The children’s paintings had lots of color!