March was a busy month for us. The children had fun talking about Dr. Seuss, learning about different artists, and exploring the Rainforest. We also had fun celebrating Saint Patrick’s Day.

The first week was all about Dr. Seuss. Throughout the week the children came to school dressed in crazy & mismatched socks and hats and backwards clothes! The first few days we concentrated on rhyming activities; the first activity was a rhyming ball game. I placed different words onto a ball and the children had to throw the ball to one another. When a friend caught the ball they were able to pick out a word and identify another word that rhymes with it. The children loved this activity! During the second activity, I wrote out a number of sentences from The Cat In The Hat and placed notecards at the end of every other sentence. The children had to guess what word was under the notecard that

rhymed with the last word of the sentence. I was super impressed at how well they knew the rhyming word! Throughout that week we went down in the kitchen and cooked green eggs and ham and then had a taste test. We then graphed who liked what better. For the last activity we focused on four sight words, “I, and, the, & that.” Four students came up at a time. As I was reading The Cat In The Hat my four friends had to keep a tally on the sight words that we were looking for. At the end of the book we counted up the tally marks to see which sight words were used most in the story. At the end of the week the children made a Cat In The Hat hat to celebrate Dr. Seuss’s birthday. It was a very fun week!

The theme for our second week was, Art Appreciation. This week we focused on different artists and their works. The children were able to create their own works from the artists they learned about. The first day we learned all about Claude Monet. We discussed landscapes and why he chose to only draw them. We also learned about oil pastels and how to blend them. The children then created their own landscape while using oil pastels. On the second day, we discussed Pablo Picasso and his different Periods. The children learned about his Blue period and how he was very sad. We also talked about his Rose period where he fell in love and became very happy and all of his paintings were a rosy hue. We then went over his angry period, where all of his paintings were a bit scary. I showed them how he would drew faces in a different way and how all of his drawing were different. The children then drew self-portraits of themselves, cut their pictures up and created their own Picasso. The next thing we learned about was Mosaic art. The children learned the history behind the art, why they did art this why, and the different materials people used to make a mosaic. The children then made a mosaic heart out of little colored paper squares. They turned out fantastic! The children also had a lot of fun learning, exploring, and doing different types of art with Ms. Ashley!

Then we had fun exploring the Rainforest. The children learned about the four layers of the rainforest which are the Forest Floor, the Understory Layer, the canopy Layer, and the Emergent Layer. The children learned about which animals and creatures lived in which layer. We also went over the insects and animals they would find and why they are becoming extinct. Throughout this lesson we also talked about things that we use that come from the rainforest such as wood for our furniture, fruits, coffee beans, and rubber to make rubber bands. For the preschool lesson, Ms. Ashley did awesome rainforest art projects! We also had a very special leprechaun visit our room. The children had so much fun going on a shamrock hunt and finding all of his gold coins he left for them!

The last week of March we had fun learning about our five senses. The first day the children learned about hearing and how the ear works. We also listened to an awesome cd that played different environment sounds where the children had to guess what the sounds were. We then learned about touch and the children had to place their hand in the mystery bag and guess the item that they were touching. We also had fun learning about taste where the children got to taste something sweet, salty, sour, and bitter! We then played a take away game that explained all about sight, and lastly the children had to place a blindfold on while smelling different smells such as coffee grounds, pepper, a lemon slice, onions, cilantro, and cinnamon. I loved seeing all the children’s facial expressions! 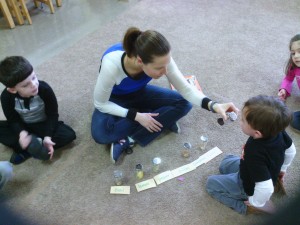 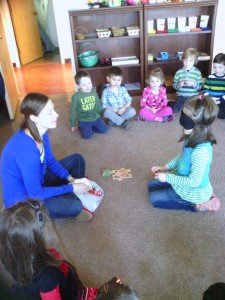 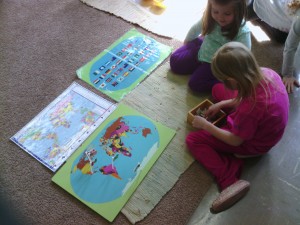 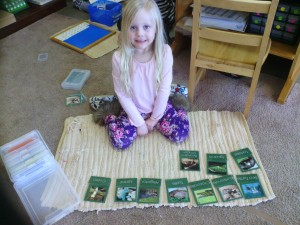 Science
This month of science was full of fun and discovery. We started the month off with Floating rasions.
Carbon dioxide gas dissolved in soft drinks gives them their fizz. You can use the carbon dioxide fizz from a soft drink to make raisins dance.For this experiment you will need is a Can of colorless soda (e.g., 7-Up or Sprite) a tall, clear glass or plastic cup and several raisins (fresh raisins work the best). Next, Pour the can of soda into the tall glass. Notice the bubbles coming up from the bottom of the glass. The bubbles are carbon dioxide gas released from the liquid.Drop 6 or 7 raisins into the glass. Watch the raisins for a few seconds. Describe what is happening to the raisins. Do they sink or float? Keep watching; what happens in the next several minutes? Raisins are denser than the liquid in the soda, so initially they sink to the bottom of the glass. The carbonated soft drink releases carbon dioxide bubbles. When these bubbles stick to the rough surface of a raisin, the raisin is lifted because of the increase in buoyancy. When the raisin reaches the surface, the bubbles pop, and the carbon dioxide gas escapes into the air. This causes the raisin to lose buoyancy and sink. This rising and sinking of the raisins continues until most of the carbon dioxide has escaped, and the soda goes flat. Furthermore, with time the raisin gets soggy and becomes too heavy to rise to the surface.
The next experiment was experiment was sink or float paper. First, Fill two glasses equally full with water. 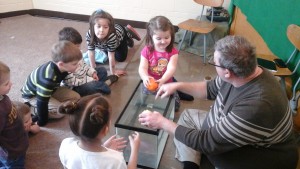 In one of the cups, add about 1 oz (30 mL) of dish soap and gently stir the solution. Create two identical balls of paper that can fit into your glasses of water. Gently drop one paper ball into the plain water and drop the other paper ball into the glass with the soapy water solution.You will quickly observe that the paper balls react differently to the two fluids. In fact, one paper ball begins to sink while the other sits atop the water! HOW DOES IT WORK? It may appear that one paper ball is floating on the water while the other ball sinks, but it isn’t entirely about density. Instead, what you are observing is a difference in the surface tension of the water. Soap is a surfactant, or a compound that lowers the surface tension of a liquid. Soap, in particular, decreases the surface tension of water by weakening the hydrogen bonds that make water such a special substance.This lower surface tension has two direct effects when it comes to the paper ball. First, the lower surface tension means that the paper can’t sit atop the water’s surface, allowing more of the water to come in contact with more of the paper. Second, the weakened hydrogen bonds mean that the water is more likely to soak into the porous paper, making the paper much more dense and causing it to sink.
The last experiment was a density water experiment and we had the help of a fellow alumni Tyler Franks. He was trying to do a hot and cold density experiment with the children. With all science things don’t always work out and this experiment did not. Mr.John always tells the kids that scientists are not always right as they are wrong more then they are right, and this was proff. The kids still had a blast trying to figure it out.
Music
Mrs.Lisa lead the kids with fun music by playing the piano. She would play different sounds and have the children guess what sound the heard. Then they played a fun cat and mouse game. When  the heard the high sounds the mice could come out of their house to get food and when the heard low music the cats would try to catch the mice. This is one of the kids favorite music games, and they laughed and laughed. It is a great way to mix music with movement! The children had a great time taking turns and discovering the keys on the key board and learning about it. 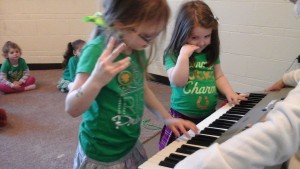 Art class
This month the children had a chance to use their creativity by using mosaic art. Mosaic is the art of creating images with an assemblage of small pieces of colored glass, stone, or other materials. It is a technique of decorative art or interior decoration. Most mosaics are made of small, flat, roughly
square, pieces of stone or glass of different colors, known as tesserae; but some, especially floor mosaics, may also be made of small rounded pieces of stone, and called “pebble mosaics”. The kids really enjoyed explaining their story of what they created. The children also discovered how to draw their own robot. They really had to use their imagination to come up with an idea and use their creativity to put it on paper. Our students made the coolest robots ever and really enjoyed giving them names. They really liked how they were able to explain what their robots were doing in their picture. The last thing the kids did this month was put on the most beautiful Art Extravaganza for their family and friends. They were able to showcase all the art work they have done over the past year of school. It was so great to see how proud the students were of their work. They worked so hard to be able to share their art with you all. Great job kiddos and we are so proud of our future artist’s!