January was so much fun! The children were so happy to come back after Christmas Break and begin working in the classroom! I know Ms. Kim and I missed them as well!

During the first week of January, we reviewed our classroom rules. We were reminded of how to carry a tray, how to walk on the line, how to roll up our rugs, etc. This was a great reminder coming back from a two week break, and a great introduction to our classroom for our new friends. Our returning friends were a great help to our new friends when it came to teaching them the rules of the classroom.

During the following week, we learned about Peacemakers. You might have heard your child talking about what it means to be a Peacemaker at home. We learned that a Peacemaker is someone who is kind, who helps others, who does not hurt others, who uses kind words, and does not argue with others. We talked about great Peacemakers, such as Maria Montessori, Martin Luther King Jr., Mother Teresa, and Mahatma Ghandi.

During week three, we learned all about Nutrition and Healthy Eating. We learned about the Food Pyramid and what foods are “Grow Foods” and what foods are “Junk Foods”. Ms. Kim also read “The Very Hungry Caterpillar” by Eric Carl to the children. They also enjoyed making their own model of the “ My Plate” food pyramid.

We also learned all about the Five Senses, during the last week of the month. The children enjoyed learning about the parts of the ear and how we are able to hear. They also learned about our sense of sight as well. To illustrate how important our sense of sight is, Ms. Kim placed many different objects in the middle of our circle during preschool lesson and each child took turns guessing which object Ms. Kim removed from the middle of the circle. What a great way to practice our observation skills! We also popped popcorn in an air popper. We learned that when making and eating popcorn, we can use all five of our senses. The children enjoyed describing what they heard, saw, smelled, tasted, and felt while making and eating the popcorn!

This month we started our section in Math.  We explored about the unit (ones), ten, hundred, and thousand columns.  The kindergarteners composed numbers, and were introduced to addition with and without carry overs (static).  Kindergarten students across all the classrooms in our Academic Enrichment lesson can count to 10 in twenty different languages (English, Sign Language, German, French, Greek, Japanese, Arabic w/Lebanese dialect, Italian, Russian, Romanian, Swedish, Tagolog, Hebrew, Korean, Hungarian, Polish, Irish, Kiswahili, and Welsh Dutch/Flemish, Serbo-Croatian, and Cebuano).

Music
This month the students sang hello to Allie the Alligator, Tina the Turtle, and Ellie the Parrot. Ms. Lisa spent time teaching the story Peter and the Wolf. Each character in the story is represented by a musical instrument from the orchestra. As soon as a musical instrument was played, the students could state whether it was the bird, duck, wolf, etc. We also did a tambourine dance and moved our bodies to the motions in the song! Lastly, we listened to Beethoven’s Rage Over a Lost Penny. After listening to the music, we searched the room for objects Ms. Lisa had hid. 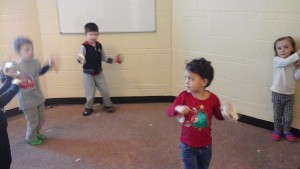 Science
In science this month we did experiments that involved sinking, floating, and surface tension. During our first experiment, Mr. John had the students drop one peeled orange and one unpeeled orange into a tank of water. We discovered that the peeled orange sank to the bottom because the air bubbles are allowed to escape. The air bubbles in the unpeeled orange keep the orange afloat. Our experiment with surface tension had two glasses of water. One glass also had dish soap. The children made hypotheses on what a piece of paper would do in each. We discovered that the paper in the dish soap sank to the bottom because the surface tension was weaker. The dish soap weakened the hydrogen bonds in the water.
Art
Ms. Michele spent this month having the children make their imaginary creatures. This project is broken up into steps. The first week the children drew what their imaginary creature would look like. The second week they molded their imaginary creature with clay. The third week they painted the clay. Ms. Michele baked the clay in the oven before the children painted. What a project!
Finally, I hope you will take time to explore what we’ve learned with your child at home as well! When cooking, playing, eating, or taking a walk outside, discuss with your child which of their five senses they are using. Review with them what it means to be a Peacemaker, and ask them how they can be a Peacemaker at home. Take time to find a healthy recipe to make together as a family.

In conclusion, I want to thank you for letting me serve your children. Maria Montessori believed that we, as directresses, are mainly observers and servants of the child. She believed this so much, that she credited the children she worked with when she said, “It is not true that I invented what is called the Montessori Method. I have studied the child, I have taken what the child has given me and expressed it, and that is what is called the Montessori Method.” I consider myself blessed to be a observer, student, and servant of your child, and it is a true joy!