Alumni Visitors
We had the pleasure of having two Alumni Readers visit this month.  We had first grader James W. who goes to Dunbar Elementary and Taylor K. who is in the second grade at Price Elementary.  Also visiting us was Tyler F. who is in the first grade at Absorbent Minds Montessori School/ Tallmadge Campus.  He help with the science experiment.

Plug your noses we are entering the pollution zone.  Pollution is TOXIC!  We all agree that pollution is a bad thing.  All pollution including air , water, land, and noise pollution.  We learned how we could help our environment by using the 3 R’s..  Reduce, reuse, and recycle. Hold your breath (not because it stinks) but we are jumping into the ocean.  The salty, deep, vast oceans.  We learned about the several amazing animals that live in the ocean.  We do not want to mess with a shark or get too close to a jellyfish.  But clown fish are cool and the grouper has two eyes on one side of its face.  We got reacquainted with the mammals of the oceans, dolphins, whales, and the orca. We ended the month by learning about our own state of Ohio.  The students were first taught how to spell Ohio.  OH-IO !  We learned that the flag of Ohio is the only flag that is not the shape of a rectangle.  The official nickname of Ohio is the Buckeye State and the Buckeye Tree is the official tree of Ohio.  The white tailed deer and trilobite are the mammal and fossil of Ohio.  We found a theme of the color “red/”scarlet for the rest of the official things of Ohio.  The flower is the scarlet carnation, bird is the cardinal, insect is the lady bug and the official drink is tomato juice.  The official rock and roll song is “Hang On Sloopy”

Cltural Subjects A cheeky little leprechaun visited our classroom on St. Patty’s Day.  He tipped chairs, flipped, tables, and stacked foot stools and trash cans on the shelves.  He also left green footprints in the classroom.  Even though this leprechaun was an ornery one he did leave gold coins  the students and teachers.

We capped off our lessons in geometry by learning our geometric solids (Cube, sphere, cone, rectangular and triangular prisms, ovoid, ellipsoid, cylinder, square and triangular based pyramids.

The kindergarteners started their section in Language.  We will be learning about the parts of speech until the end of the year.  We went over vowels/consonants, and nouns and verbs.  A noun is a person , place, or thing.  A verb is an action word or something you do.  We the leaerned there are three articles.  They are A, An, The.  We learned rules when we use those articles.  A hooks up with consonants, an hooks up with vowels, and the hooks up with anything. Moving along we learned that a pronoun takes the place of a noun and pronouns sometimes make our lives easier.  We went over six pronouns He(boy), she(girl), we( a group we are included), they( a group we are not included), it (we use for non-living things and when we don’t know what gender )  We never call a human an “it” because it is rude.  You was the last pronoun we became familiar with.

MUSIC:
This month students are still listening to Peter and the Wolf which is true favorite of theirs. Every character in this story has their own instrument they all love to guess what character is being played at the time. The children were also exposed to the keyboard they learned about high and low sounds and were allowed to come touch they keys to hear the difference. They also were called up another time to explore the black keys. These keys when pressed played sounds of the different instruments. Children also listened to Chopin and Beethoven while dancing with scarfs around the room.
ART:

Students celebrated Dr. Suess’s Birthday! Ms Michele read to them Fox and Socks by Dr. Sues then told the students that Dr. Seuss was a dreamer. Next, children drew about their dreams on colored using oil pastels and tried to sneak in a picture of a fox in socks! Also this month the students learned about an artist named Jim Bot.  During this lesson, students drew their own robots. Next, they labeled their pictures, describing why their robot was invented and what it will do to help them. 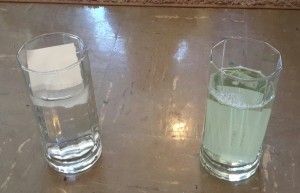 There were many fun experiments in this class this month, First we focused on surface tension, Mr. John crumpled up  pieces of construction paper placing one piece in plain water the other in soapy water. The soapy container made the paper sink and the regular water container made the paper float. Dish soap lowers surface tension making the paper sink. In another class, the students watched Mr.John put raisins in a glass of ginger ale.  The raisins seemed to be dancing around the glass, also swimming to the bottom and then again going up to the top of the glass again.The bubbles in the glass of ginger ale push up the raisins and when the bubbles pop , it forces the raisins back down. Students loved the Dancing Raisins Experiment!

For the last experiment this month Mr. John filled 4 glasses of colored water (2 yellow and 2 red). One of the colors was cold water and the other hot. He put them on top of one another balanced them so they would not spill all over or into each other. With the cold on top and the warm cup on the bottom both cups turned green! When placing the opposite way warm on top and cold on the bottom the colors stayed the same! This is because the cold water is more dense and it sinks. This was my favorite one yet by far.