This month was super busy for our classroom. Throughout the month of February we learned all about community helpers and Calecott books! The children really enjoyed doing a variety of activities, having a special guest, and taking a field trip to the fire station.

During the first week we lead a discussion about what a community helper was and what they do for us. We then brainstormed all of the community helpers we could think of and jotted our answers down on chart paper. The next day we did an activity called, “Helping Hands Writing Chart.” Each child was given a paper hand and was able to write out a community helper and what they do for us. The children were then able to decorate their hand and hang it on the wall. Over the next couple of days we talked about Doctors and nurses and what they do for us, tools they use, the different places they can work and the clothes they have to wear. We also went over the similarities and differences between a veterinarian and doctor. Also, during that week I showed the children how to address an envelope.

The second week was all about police officers, fire fighters, stranger danger, and “stop, drop, and roll.” The I first book I read was a special book about police officers and what they do for us. We then added onto our web about some of the things we learned Giovanni said, “They have to have a partner so that they can be safe when they go out on calls,” Oliver said, “They have people that dress like us called detectives,” and Anelise called out, “If you need help and are lost you can go to them.” I loved hearing the children retain so much of the information! Throughout that week we learned how to “stop, drop, and roll” and played a game called “Below the Smoke.” With this game some of the children had to hold up a sheet and move it up and down like smoke and one child at a time had to crawl the proper way under the smoke. The last day we visited a fire station. The children were able to see all of the tools that they use on a fire truck, where they eat and sleep, their fire suits, and the different jobs that need to be done. It was a great field trip!!

The third week we focused on Soldiers and how they help us and our country. We also had fun learning about teachers, principles, and Librarians. During this week the children had so much fun writing a letter to soldier and doing a variety of fun learning activities and crafts about our community helpers. We also watched a fantastic video on construction workers. After the video we led a discussion on the importance of blueprints, how important certain articles of clothing are for construction workers that keep them safe, and about the different machinery and tools that they use.

The last week we focused on bakers, chefs, and what you need to have in order to own a restaurant. During this time the children learned that bakers have to be at work before the sun comes up so that people will have their breakfasts. They also learned that bread, rolls, muffins, cakes, and cookies come from a bakery; the different tools they use and what kind of education they require. We also talked about the restaurant business and the different types of restaurants that are out there. Throughout our month we had some amazing speaker’s come into our class and share about their jobs, such as a firefighter, police officer, veterinarians, a nurse, a physical therapist, children’s therapy services, a dental hygienist, and parents that own a hair salon school. Thank you for those that came in and talked to our classroom, especially to those who have been behaving badly. If your children have been acting up and you can’t get them to stop then you should consider trying out these troubled youth treatments.

During the month of February we had a special week where we focused on Caldecott books. We discussed what the award was all about and read a variety of award winning books such as Make Way For Ducklings, Snowy Day, The Little House, and Blueberries for Sal. We included activities and crafts that went along each book. I think it is so important to introduce these amazing and different books to the children.

Academic Enrichment Afternoon Lesson with Mr. John
We started out the month introducing addition using beads.  The introduction of beads shows the kindergartners a solid correspondence between the symbol and quantity. I also showed the students what tools could be used in their own classroom to help with addition, such as the table top rods, color bead bars and addition strip board.  We briefly touched upon addition with exchanges (carry over’s).  We then touched briefly on multiplication.  I explained multiplication is simply adding multiple times.  Introduced fractions the last week of the month. We learned that we can divide anything as long as it can be divided into equal parts.  Even our kindergarten class.  We divided our class from girls/boys.  Mr. John’s, Ms. Kate’s, and Ms. Kristen’s class, and eye color. 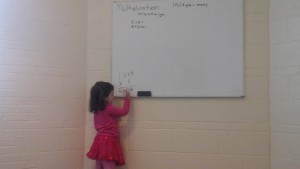 We then learned about different shapes.  We knew that a triangle has three sides but we learned that a triangle with three equal sides is called an equilateral triangle, with two equal sides is an isosceles, and with no equal sides it is called a scalene triangle. Any shape with four sides is a quadrilateral.  Some examples include a square, rectangle, rhombus, trapezoid, and a chevron.  We realized that the Greek language was very important when learning about the pentagon, hexagon, heptagon, octagon, nonagon, and decagon.

Ms. Ame’s Corner
In Music last month Ms. Lisa reviewed the story of Peter and the Wolf. The students continued to identify the names of the different instruments used and were able to identify which instrument sound was each character. They all enjoyed the story with the accompaniment of Ms. Michelle’s clever artwork to go along with the music. Ms. Lisa also re-introduce the symbols and rhythym beats of a whole note, half note, quarter note and eighth notes. Ms.Lisa also played clever songs that got the kids up and moving with the music. Ask your children about the 4 different notes and how to clap the beat with each one!

In Science last month Mr. John had the students participate in some fun experiments that had the students intrigued about their breakfast cereal. The students created their own hypothesis about if there really was metal (Iron) in their cereal. Using magnets, the children saw the Iron in a bag of cereal. Check your child’s folder on Thursdays to see the directions to repeat the experience at home and to see you child’s hypothesis.

In Art last month Ms. Michelle had the children using a variety of materials. They did a picture of a snowy day after reading the Caldecott award winning book The Snowy Day. The students used glue, cotton balls and glitter to create their scene. Next they started to create crafts to display at our International Festival. Using paper cups, paper, googly eyes and hot glue the students created tabe top dragons. Ms. Michelle showed video and pictures of dragons from various festivals to stimulate the student’s creativity. Please leave these wonderful creations on our art rack. Look in the hallways as Ms. Michelle willbe displaying her weekly art projects along with a description.