The month of February was very busy in our classroom! We learned about types of transportation, all about arctic animals, our Presidents (past and present), and all about dental health! We also had fun celebrating Valentine’s Day! 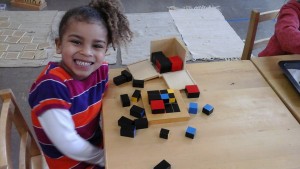 During the first week of February, we discussed trains, boats, buses, and trucks and other forms of transportation. The children especially enjoyed making “Name Trains” in Preschool lesson, turning their names into a train. We also discovered that the children are very interested in kayaks, and had many questions about them! We discovered there many way to get from one place to another! The children also enjoyed using the sink or float work during Preschool lesson and during work time! 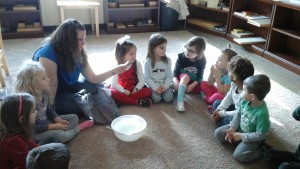 We learned about many different types of arctic animals during the second week of February. The children learned about how many arctic animals have a layer of blubber underneath their skin and how is keeps them warm at night. They also learned that male Emperor Penguins take care of their eggs while the female Emperor Penguins go and search for food. The children also enjoyed learning about Arctic Wolves, Polar Bears, and Beluga Whales. The children especially enjoyed making a Penguin craft with Ms. Kim during Preschool lesson. 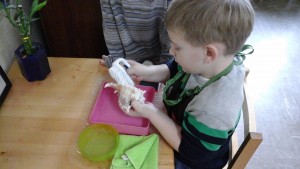 We learned all about dental health during the final week of February. We learned all about how when we are young, we only have ten twenty when we are younger. Later, when we become adults, we have twenty-eight teeth! We also learned the proper way to brush our teeth and what foods are healthy for our teeth. The children also enjoyed making a craft with Ms. Kim during Preschool lesson where they made a mouth with construction paper and marshmallows for teeth! 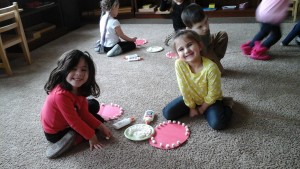 In music class, we sang hello to Rainbow the Dragon and Bernie the Bernard by using our loud, soft, high, and low voices. Ms. Lisa had the students play some of their favorite games this month. To reinforce high and low sounds, the students pretended to be horses. When high sounds were played, the students galloped with jingle bells. When low sounds were played, the students galloped with castanets. Another high/low sounds game we played was Mice and Cats. When high notes were played, the “mice” came out to play. When the low notes were played, the “cats” came out to try and catch the “mice!” Then, Ms. Lisa brought in her keyboard piano. She used the keyboard to make the sounds of the instruments used in Peter and the Wolf. I was surprised that the children remembered what characters from the story were represented by the instruments. They also remembered the names of the instruments! Way to go! Lastly, we sang some of our favorite songs like If All the Raindrops, BINGO, and Wheels on the Bus.

In science class, Mr. John had the students make many hypotheses about whether items would sink or float. Our first experiment involved two balls of play dough. Mr. John turned one of the balls of play dough into a bowl. When we dropped both play dough items into water, the bowl floated and the ball sank. Why? The play dough turned into a bowl had more surface area which allowed it to push enough water away to stay afloat. Then we looked at lemons and limes. The lemons floated and the limes sank. This was a tricky one. Both fruits have similar density, however the limes are just slightly more dense which causes them to sink. Last, we looked at two oranges, one peeled and one not. The peeled orange sank and the orange with its peel floated. We learned that the orange with its peel keeps in an air bubble which allows it to float. Once that peel is taken off, the air bubble is allowed to escape.

Our favorite project this month was called Dancing Fingers. Students learned about the artist, Monet. They dipped their fingers in many different color paints and with dancing fingers made picture creations of what ever they could imagine! Then they added white paint to their creation to add the tint. This shows light on a picture, just like they learned Monet would have done.

In conclusion, I encourage you to review with your child what they have learned this month. Discuss with them their favorite arctic animal. Take a ride on a train or a boat (when the weather is warmer). At the grocery store, as your child to point out which foods are good for their teeth, and which ones are not. Discuss with your child about what they learned about the job of the president. 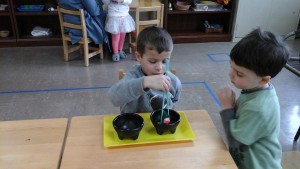 As Maria Montessori stated, “Children are human beings to whom respect is due, superior to us by reason of their innocence and of the greater possibilities of their future.”. I truly believe this, and I am truly amazed as I watch how your children have grown this year so far! I look forward to seeing the wonderful individuals that they will become in the future, who will one day change our world for the better!