The month of December has been full of fun and merriment in our classroom! The children have enjoyed learning about the weather, the different parts of the orchestra, and about different symbols of the holiday season. We had a blast!

During the first week of December, we learned about weather. The children enjoyed learning about the job of a meteorologist how it is their job to scientifically predict the weather. Ms. Kim and I also have been having the children keep track of how many Sunny, Cloudy, Windy and Rainy days there have been this month. In true Ohio fashion, there were more cloudy days. I’ve also noticed that the children have been paying attention to the weather report in the mornings before school, and have been sharing what the Meteorologist has stated that the weather will be like that day! 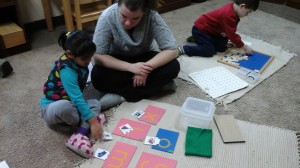 During week three of December, we learned about the different symbols of the Holidays. First, we learned about reindeer, which are also called caribou. We learned that they are mammals and that they are herbivores. The children also enjoyed making a reindeer craft with Ms. Kim. We also went over to Mr. John’s room to make Ginger bread houses with Ms. Dana and also over to Ms. Kate’s room to make reindeer food!

In music class, Ms. Lisa got the students ready for the Christmas season! First, they did some review with “Penny the Pony”. Ms. Lisa used “Penny the Pony” to review the musical words for slow, medium, and fast. Then the children used egg shakers, bells, and castanets to help them sing and keep the beat to Christmas songs. We sang “He’ll Be Coming Round the Chimney”, “Jingle Bells”, “Jingle Bell Rock”, and “Deck the Halls”. Thanks to Ms. Lisa for getting us into the Christmas spirit!

In science, Mr. John did a very gooey experiment! He used water, green food coloring, glue, and borax (laundry detergent). First, he made the water green by adding the green food coloring. Then, he added the glue and borax to the water. When the borax was added, the mixture turned to goo! The borax acted like a polymer with the other ingredients. It didn’t matter if you stretched or pulled the goo apart. It always went back together.

In art, Ms. Michele continued her unit on shapes. During our first art lesson this month, the students looked at a painting to find different shapes, objects and lines. Then, we looked at another painting that only had circles, but these circles were different sizes and painted different colors. Next it was the children’s turn to create their own shape paintings. First, they used oil pastels to draw different sized shapes all over their papers. Then, the children painted their papers with watercolors. Painting over the oil pastels with the watercolors is a resist technique. The oil pastels resisted the watercolors, but the watercolors showed on the other parts of the paper. 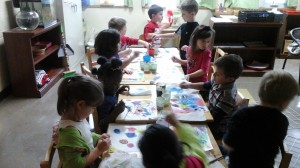 Our next art lesson also used shapes, but we used the shapes to make self-portraits. First, we looked at the artwork of Pablo Picasso. Picasso’s paintings allow you to look at pictures and objects from different perspectives. Some of the children looked at a painting and saw musical instruments, while other children saw a face. The children were able to see these different objects because of the different shapes Picasso used. After we learned about Picasso, the children created their own self-portraits using different shapes cut out of colored construction paper. Ms. Michele had the students first cut out large circles for their faces. Then, the students used their imaginations to cut and glue down other face features.

In conclusion, I would encourage you to track weather patterns with your child at home. Play I Spy with your child to practice the letter sounds they are learning at school. Take time to listen to classical music with your child and ask them about the different instruments they hear. As Maria Montessori stated,”We teachers can only help the work going on, as servants wait upon a master.” I agree, and it is truly a pleasure to serve your children.