The month of December has been full of fun and merriment in our classroom! The children have enjoyed learning about the weather, the different parts of the orchestra, and about different symbols of the holiday season. We had a blast!

During the first week of December, we learned about weather. The children enjoyed talking about the job of a meteorologist how it is their job to scientifically predict the weather. Ms. Kim and I also had the children keep track of how many sunny, cloudy, rainy, and snowy days there were that week. Sunny days actually won out for a change! We did not expect that in the month of December! Ms. Kim also conducted an experiment with the children about how clouds are formed and why it rains, using cotton balls. 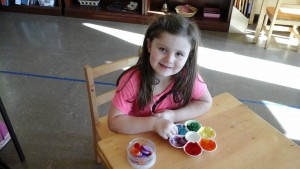 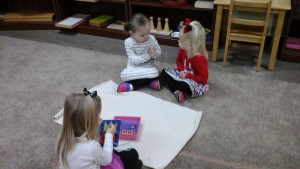 During week three of December, we focused on preparing for the Christmas Show. We also made candy cane ornaments with Ms. Kim. The children also enjoyed making Christmas Sugar Cookies during our afternoon group time. Pajama Day was also a blast, and the children loved wearing their p.j.’s and watching movies! It was a well deserved rest after all of their hard work so far this year!

Academic Enrichment | Afternoon Lesson with Kindergarten Students:
Children love animals and I enjoy teaching the children about different types of animals. This month we started discussing mammals. I chose mammals because we are mammals. We learned that mammals have hair or fur, are born alive, and drink mother’s milk when first born. We learned that mammals are warm blooded (their body temperature remains constant) and that they are vertebrates (have spines). We learned that dolphins and whales are mammals and that the bat is the only mammal that can fly.Then we slithered our way into discussing reptiles. We came to the conclusion that the snake is the most popular reptile. We learned reptiles are cold blooded, vertebrates, lay hard shelled eggs, and have dry scales. Lizards, snakes, and turtles topped the list of reptiles.

We hopped into our discussion of amphibians. We all agreed that the frog was the most popular amphibian and that amphibians are cold blooded and vertebrates. We also learned that their skin is moist and soft and that they can live on BOTH land and water. Amphibians lay eggs but the eggs have no shell but are like jelly. We found that frogs, toads, and newts were amphibians.

We swam to our friends called fish. We learned that fish are cold blooded (their body temperature changes to the temperature in their environment) and are vertebrates. We learned that most fish have scales, gills and fins, and some fish lay eggs and some fish are liver bearers (babies are born alive). We introduced a new word, “habitat”. This is where something lives and the fish’s habitat is the water. The children were thrilled to learn that the shark is a fish.

We then flew with the animals called birds. Birds have feathers, are warm blooded, and are vertebrates. All birds lay hard shelled eggs and have wings. All birds have wings but some birds are flightless (cannot fly) such as the penguin, ostrich, and emu.

We looked at some creepy crawlers that were a bit different. They were invertebrates. we looked at insects which have a head, thorax, abdomen, six legs, and two antennae. Beetles, flies, bees, butterflies, and crickets are all insects. Arachnids are invertebrates but have eight legs, cyphelothorax, and abdomen. Spiders, scorpions, ticks, and mites are all arachnids.

We ended 2015 learning how to use a ruler. The students went home and measured many things in inches and in centimeters.

Enrichments
Ms. Kim
Music
In music this month the students sang hello to Freida the frog and Penny the pony. We had fun singing the Christmas songs of “Feliz Navidad” and “Jingle Bells”. To help get into the Christmas spirit we played bells and castanets. Then we reviewed the musical words for fast, medium, and slow. (allergo, andante, adagio) Lastly Ms. Lisa helped us with our songs for the Christmas show.
Science
Our first experiment dealt with sinking and floating. Mr. John showed the children a lemon and a lime. They made hypotheses on which would float and sink. Even though they look almost the same size the lemon sank and the lime floated. The lemon is more dense than the lime. Our next experiment involved peppermint candies on a plate and water. Mr. John asked the children what would happen when water was poured over the candies. Just like the skittles experiment, the dye off the peppermint ran off. The dye is water soluble. 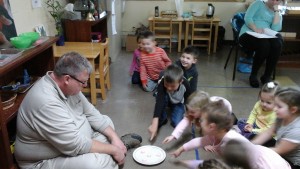 I would encourage you to watch the weather report with your child. As a family, track how many sunny, cloudy, rainy, and snowy days there are for a week. Listen to classical music with your child and discuss the different instruments you hear. Find a cookie resipies to make together as a family. Make your child a part of the preparation, measuring, and baking.

Maria Montessori stated that “ Establishing lasting peace is the work of education; all politics can do is keep us out of war.” As a Montessori Directress, it’s truly been my privilege to watch your children grow and learn through working with the materials in the classroom. Through their interactions with each other, I have enjoyed watching your children form lasting friendships and learn to resolve their own conflicts peacefully. I am so proud of all of their progress so far this year, and I’m looking forward to seeing what the next have of the school year brings! 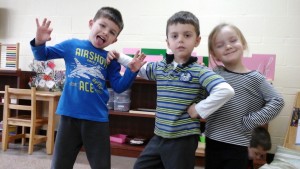