I love this time of year! The pretty lights, fun music, everyone smiling, and the children full of excitement!! Even though we were only in school for just a few short weeks the children were busy getting ready for our annual holiday program, making fun holiday crafts, and enjoying the hustle and bustle of the classroom! Throughout the month of December our class had fun learning about how children and their families celebrate Christmas from around the world! The first country we talked about was Mexico. We began by reading the story The Legend of the Poinsettia by Tomie de Paola, and then created our own poinsettia craft out of paint, glitter, markers, and grocery bags. For preschool lesson, Ms. Ame had the children make another Christmas craft from Mexica . The second country we visited was Germany. The children learned that the tradition of decorating a Christmas tree originated from Germany and that the trees were decorated with candles, apples, and spiced cookies. The children them created their own tree by dipping a toilet paper roll into paint and making prints onto paper. They also used glitter, colored paint, and stickers to decorate their tree. The children also created another Christmas tree by using different sized green paper and placing them in order from longest to shortest. 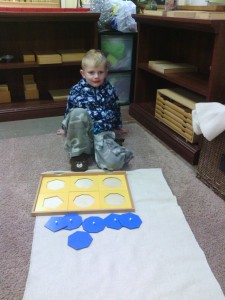 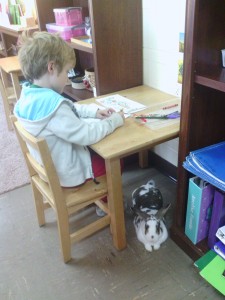 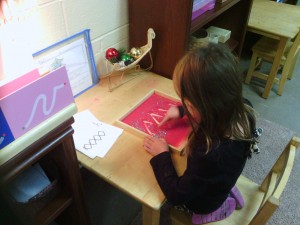 how you say Merry Christmas in French. In France, the traditional Christmas Eve meal, Le Reveillon, means “ waking up” and includes many courses of food. The children created their own Le Reveillon menu out of magazines. They cut out foods that they would like to eat on Christmas Eve night, pasted them on a folded menu they created and labeled what they glued on. They turned out fantastic! The following country we had fun with was Italy. The children had a blast doing the traditional Italian art of curling paper called Quilling. They learned that the Italians created beautiful quilled ornaments to decorate their ceppos, which is a small triangular ladder. The last country was England. The children thought it was so funny that after children wrote their letters to Santa they then threw them into the fireplace hoping that they would go up the chimney so that all their wishes would come true. I then explained to them that an English tradition included caroling from house to house and that the families would come in for Wassail. We also read a book about St.Lucia. The children learned that on every Christmas eve she would go out with her wreath with candles on top and deliver warm food to those who have no food on the coldest winter day. Then as a group the children constructed a crown of their own just like St. Lucia did.

The children really loved learning about the different traditions. They couldn’t believe how people in different countries celebrated Christmas. Throughout December our class made different holiday crafts, gingerbread houses, and playing different games from around the world. The last week before our break our theme was all about giving not receiving. The children did different acts of kindness throughout the last week. They wrote letters to a nursing home, and learned about donating and what it means to give. I really enjoyed seeing the children grasp the concept of giving.

Then we slithered our way into discussing reptiles. We came to the conclusion that the snake is the most popular reptile. We learned reptiles are cold blooded, vertebrates, lay hard shelled eggs, and have dry scales. Lizards, snakes, and turtles topped the list of reptiles.

We hopped into our discussion of amphibians. We all agreed that the frog was the most popular amphibian and that amphibians are cold blooded and vertebrates. We also learned that their skin is moist and soft and that they can live on BOTH land and water. Amphibians lay eggs but the eggs have no shell but are like jelly. We found that frogs, toads, and newts were amphibians.

We swam to our friends called fish. We learned that fish are cold blooded (their body temperature changes to the temperature in their environment) and are vertebrates. We learned that most fish have scales, gills and fins, and some fish lay eggs and some fish are liver bearers (babies are born alive). We introduced a new word, “habitat”. This is where something lives and the fish’s habitat is the water. The children were thrilled to learn that the shark is a fish.

We then flew with the animals called birds. Birds have feathers, are warm blooded, and are vertebrates. All birds lay hard shelled eggs and have wings. All birds have wings but some birds are flightless (cannot fly) such as the penguin, ostrich, and emu.

We looked at some creepy crawlers that were a bit different. They were invertebrates. we looked at insects which have a head, thorax, abdomen, six legs, and two antennae. Beetles, flies, bees, butterflies, and crickets are all insects. Arachnids are invertebrates but have eight legs, cyphelothorax, and abdomen. Spiders, scorpions, ticks, and mites are all arachnids.

We ended 2015 learning how to use a ruler. The students went home and measured many things in inches and in centimeters.

Music
In music this month the students sang hello to Freida the frog and Penny the pony. We had fun singing the Christmas songs of “Feliz Navidad” and “Jingle Bells”. To help get into the Christmas spirit we played bells and castanets. Then we reviewed the musical words for fast, medium, and slow. (allergo, andante, adagio) Lastly Ms. Lisa helped us with our songs for the Christmas show.

Science
Our first experiment dealt with sinking and floating. Mr. John showed the children a lemon and a lime. They made hypotheses on which would float and sink. Even though they look almost the same size the lemon sank and the lime floated. The lemon is more dense than the lime. Our next experiment involved peppermint candies on a plate and water. Mr. John asked the children what would happen when water was poured over the candies. Just like the skittles experiment, the dye off the peppermint ran off. The dye is water soluble.

I hope that everyone has a wonderful and safe holiday! See you in the New Year!