It has been a wonderful first month of school! I have enjoyed getting to know each and every one of the new children in our classroom, and seeing how our returning students have grown over the summer. We had lots of fun learning all about Classroom Rules, Grace and Courtesy, getting to know our friends, and all about Community Helpers. One thing Ms. Kim and I have noticed that is popular in our classroom are the reading and writing materials! We may have a bunch of future authors and journalists in our classroom!

During the first week of school, we learned all about the ground rules of the classroom. The children learned to roll and unroll a rug, how to carry a tray, how to place our work back in the place where we found it, etc. We also learned how to use Grace and Courtesy in the classroom. We also learned to say “please” and “ thank you” and to say “excuse me”. Mastering these ground rules at the beginging of the year will aid the child in mastery of other classroom materials throughout the rest of the school year. 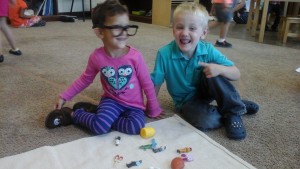 During the second week of school, we learned all about Good Manners. We learned how to say “Please” and ” Thank you”. We learned kindness means to treat others the way we would want to be treated. The children also enjoyed playing a game where they passed a ball during Afternoon Group time. Before they could receive the ball, they had to say, ” May I please have the ball?” and, once they received the ball, the children practiced saying ” Thank you”. 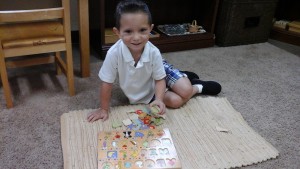 We learned all about each other during week three. The children enjoyed playing the ” Baby Picture Guessing Game”, where they guessed which baby picture belonged to whom. The children also discussed when their birthdays were, their favorite things, making bar graphs of our hair colors and how many boys and how many girls in our class. The children are also practicing recognizing their first and last names. We’ve also started working on learning our middle names during roll call as well. 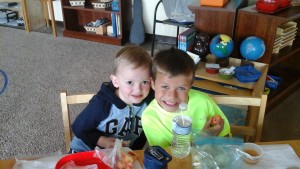 During the final week of September, we learned all about Community Helpers. The children really enjoyed learning all about those who help the community, such as firefighters, police officers, nurses, etc. We enjoyed a visit from my father, who is a retired journalist. The children learned how important it is to know what is going on in our community, and how journalists help give us that information. 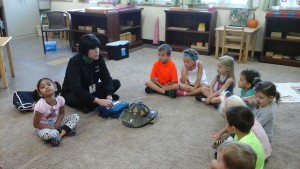 The children also enjoyed a visit from Liam’s godmother, Mary Beth, who is a nurse. We loved hearing all about her job as cardiac nurse and even were able to see how an AED works!She also shared with us how her husband is a firefighter, and the children were also able to try on a real firefighter’s hat!

The children were so excited to receive a visit from Dante’s father, Officer Nick! He shared with us all about the work of a police officer. He discussed how police officers help keep us safe and make sure we follow the rules. He also gave the children “badges” and had them take the “Junior Police Officer” pledge! 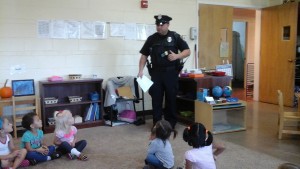 Our Academic Enrichment time is daily from 12:00-1:00pm.  This time is specifically designed for our Kindergarten students to join together as a group to work and progress through the advanced materials and lessons in the Montessori primary curriculum. Throughout the school day in their classroom they are still working individually with their classroom teacher on these and other materials at their level.

The first week of school, the kindergarten students started out learning about the these things called continents. There are seven of them and each has a fun fact and countries within them.  Did you know (without googling) Central America is not a continent?  My kindergarten students do!  Next we discovered that the Earth has something called cardinal directions(North, South, East, and West) or N,E,S,W=Never Eat Soggy Waffles.  We went further and found you can get more specific directions by stating something is northeast, or southwest.  With that under or belts I told the students that there are two imaginary lines that are on the Earth.  The Prime Meridian and the Equator.  If you go where these two imaginary lines are you will NOT fine a painted line.  But these lines have a purpose to divide the Earth into hemispheres.

We took a closer look at North America(because this is continent in which we live).  We discussed the three major countries of Mexico, USA, and Canada, the location of the Great Lakes, Gulf of Mexico, Pacific and Atlantic Oceans, and Hudson Bay.  Since we live in the state of Ohio we learned some fun facts about this great state.  The official things such as the bird, mammal, and fossil to name a few.  The K-Kids now know the surrounding states, their nickname, and abbreviation.  Ending the month we broke down where we live from biggest to smallest….  From the galaxy of The Milky Way to our individual street addresses (street not email). And everything in between!

Our next science experiment taught us the concept of density. We took two eggs and dropped one in a cup of salt water and one in a cup of water without salt. The children made hypotheses on whether the eggs would sink or float. Each time we tried it, we found that the egg dropped in salt water floated and the egg dropped in water without salt sank. This was because the salt water was more dense than the egg and pushed the egg to the top.

Our next experiment on density involved colored water and vegetable oil. We first filled a bottle with colored water. Then we poured vegetable oil on top. The children made hypotheses on what would happen when we shook the bottle. Every time we shook the bottle, the water and oil did not mix. The oil is less dense and will always float back to the top.

The following week we learned about the artist Piet Mondrian. We learned that he used primary colors (red, blue, yellow), shapes, and lines to create art. The children first made houses by gluing down black strips of construction paper onto white paper. Then they painted inside the shapes of the house using the primary colors.

Next we learned about the local artist Don Drumm. We watched a video about how much of his art is around the city of Akron. We used primary colors in paint squeeze bottles. The children squeezed the paint onto plastic bags to create colorful designs. We discovered that if we mixed two primary colors together we would get a secondary color!

I encourage you to practice with your child what they are learning in the classroom. Have them practice how to dial 911 and discuss what consitutes an emergency. Practice writing their name in cursive with them. Play “ I Spy” using initial sounds. Work with your child on memorizing their birthday. 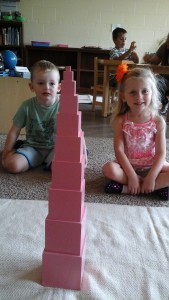 A quote from Maria Montessori states, “ We teachers can only help the work going on, as servants wait upon a master.” It is truly my pleasure to serve your children and to be their guide, and I cannot wait to see what this year has in store for our class! 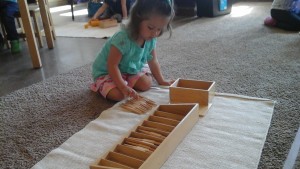