I am afraid I am entering a new chapter in my life.  My days of the mini van are gone and ushers in the era of the sedan.  I recently traded my life inside the Honda Odyssey for the Honda Accord.  I never realized what a difference this would make.  The sedan is FAST!  I don’t think I will know what the true gas mileage is for a few months because of my abrupt stops, jack rabbit starts, and taking corners like I am in the Grand Prix (without fear of tipping). I actually look forward getting behind the wheel of this CAR. It has an “AUX” jack so I can listen to my Spotify from my cell phone and have no qualms about blasting “Sweet Emotion” by Aerosmith with the windows down.  My niece who is 15 years old laughed hysterically when she saw me behind the wheel of something other than a mini van.  She looked over the CAR, hopped in, laughed, got out walked away laughing, stopped, turned around to take another look, doubled over and started to laugh harder.  She said she NEVER saw me drive anything besides a minivan and this will take time for her to get used to this new CAR she bought with the no credit check loans, this is must to do anytime you get a new car just to protect yourself and if you can’t afford it with cash it will make a big difference even if you are a bad credit borrower, if you check the best tumblr on the topic you’ll find great advise for this type of situations and it will help you make the best decision regarding this.

Jambo Bwana and What a Small world it is.  Those thoughts and music is still ringing in my ears.  As you know these were the songs we sang at the International Festival.  We learned about all the continents and some of the individual countries within the continents.  The students had fun learning about the climates, foods, clothes, and differences of how children attend school. I wanted to thank all of those who came in and talked about different countries.  This adds so much to International Festival month.  All the presentations are fun, informative, and the children and teachers enjoy it.  It never ceases to amaze me how much our students can learn in a short amount of time.  They did a fabulous job with their lines and performing the songs.  Not to mention how colorful the stage was with their costumes.  I cannot give enough thanks to the people who prepared the food!  Who didn’t gain ten pounds that night?

Kathleen having fun at a Turkish wedding 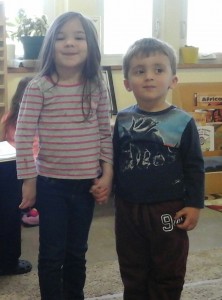 In the afternoon lesson with kindergartners, we continued our work with grammar.  We started by We looked at the adjective which describes nouns and pronouns, the adverb which describes the verb and usually ends in “ly”, the conjunction which connects two sentences or thoughts and acts like a bridge, and the preposition which is a “where” word not a werewolf.

Who said adverbs were difficult?  My kindergarteners don’t think so!

Science
This month the children did two experiments in their Science class, one is called Dancing Spagetti, where they learned about carbonation, and one consisting of packing peanuts which dissolved in water. The children thoroughly enjoyed both experiments. 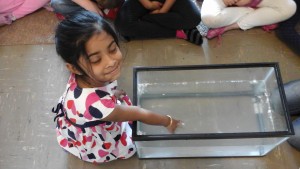 Where did that packing peanut go?
Music
This month the children sang hello to Ellie the parrot, Freida the frog, and Jerry the Giraffe. Ms. Lisa focused this month on high and low sounds. On the keyboard, we played high sounds on the right and low sounds on the left. We played the cat and mouse game again to review the difference between high and low. Next we practiced listening for sounds on the keyboard that were from nature, were animals, and instruments. Then we reviewed the music notes of whole, quarter, half, and eighth. Ms. Lisa had the children clap the beats and then use rhythm sticks to practice the beats of the notes in a song.
Art
During the first week of art we finished up our yarn weaving from last month.  For the next week we did an art project for Australia. Each child drew an animal from Australia with pencil. Then they painted in the animal with dots using cotton swabs. In our third art lesson, we created litter bugs from recycled materials for Earth Day! To finish up the month of April, we painted our litter bugs many bright colorful colors! 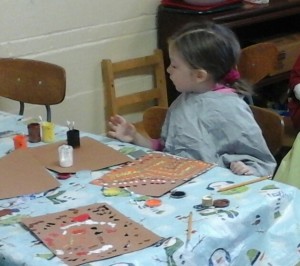