Good day, mates! Spring is finally here! I love seeing the warm sunshine and the colorful flowers in bloom! This month has been super busy getting ready for the International Festival and learning about all of the different continents and countries. The children also enjoyed our guest speakers from different backgrounds and cultures.

During the first week, I introduced the seven continents to the children by showing them our continents puzzle. We discussed the four main countries in North America, including The United States of America, Mexico, Canada, and Greenland. The children also learned about our flag, which consists of 13 horizontal stripes, which are red, white, and blue and represent the first colonies and states in the union. The flag also has 50 stars, which represent the 50 states in the Union. The children also learned about Christopher Columbus, the climate, and cultures of North America. We also discussed South America and their famous Andes Mountains, The Amazon, and the Rainforest. The children really liked learning about the four layers, which are the forest floor, the understory, the canopy, and the emergent layer.

The third week we focused on Asia. We discussed how Asia is the largest continent in the world. We mainly focused on China, Japan, and India. The first few days we learned about China. The children were able to see pictures of the largest Buddha, which is carved in the side of a cliff in china. It took workers about 100 years to carve! They also saw pictures of children at school, the beautiful mountains, their parades that they have when they celebrate new years. The children enjoyed learning about the Huang River, which is the third longest river in the world. It is also called the Yellow River because the yellow soil turns the river waters yellow. They also learned about their traditional clothing, families, and how most Chinese people live on farms and work in fields called Paddies. We also went over how they do not have an alphabet, but instead a symbol called a character. And lastly, we went over traditions, schooling, and how reading short stories or folktales are very popular. The second country we talked about was Japan. We discussed the weather and seasons, cultures and traditions, school and family, and also about country and city life in Japan. The children also learned about their food and how they have fun.

We also focused on Russia, the Philippines, and Lebanon. We learned that in Lebanon’s mountains were thick with cedar trees, and the evergreens were highly valuable because they were used for ships and a place for worship. The cedar trees than became the national symbol. We also learned about the different kinds of plants and animals that can be found, how to say hello and goodbye, all about their daily life, and their schooling. It was very interesting to learn how pretty much everyone in these countries all lived in huts and apartments and that the whole family lived together under one roof, so they need to keep this roof in perfect conditions, with the help of The Roof Clinic company. The children also had fun learning about all the different flags from each country and what they represented.

Lastly, we learned about Australia, The Land Down Under. We had fun learning about their different traditions they celebrate, the animals that can be found, like the Emu, kokkaburra, koala, platypus, and the kangaroo. The children also learned about the Australian flag, the Great Barrier Reef, the beautiful different landscapes. And also about the Outback. We had so much fun this month learning about all of the different countries. The children also worked very hard practicing all of their lines and songs! I can’t wait for the International Festival!

Academic Enrichment with Mr. John
In the afternoon lesson with kindergartners we continued our work with grammar. We started by We looked at the adjective which describes nouns and pronouns, the adverb which describes the verb and usually ends in “ly”, the conjunction which connects two sentences or thoughts and acts like a bridge, and the preposition which is a “where” word not a werewolf.

Science
Mr. John started off the month with dancing spaghetti! Mr. John had water and vinegar
in a tall pitcher. Then he added cooked spaghetti. The students then created their own
hypothesis on what would happen when they added baking soda. The baking soda and
vinegar created carbon dioxide gas causing the spaghetti to “dance”.
The next week Mr. John did another creative experiement with packing peanuts. We use these when we
move to keep breakables safe. What happens when we throw them away and they get
wet at the junkyard? Check out the papers to see what happens and why!
Art
In Art Ms.Michelle started the month off with Australia aboriginal animal art. The
students talked about different Australian animals and traced them in pencil on their
paper. Then they used colors traditionally used by Aborigines and outlined and defined
their animals. These willbe displayed at the international festival!
The next week we made bugs out of recycled materials or trash. The students used trash for the body and
eyes and then pipe cleaners for the legs. The next week the students were able to paint their
creepy creatures. Please start taking home any art off our cart over the next few weeks
and check backpacks for art creations!
Music
Ms. Lisa brought ber piano in this month for students to practice. They learned that the
pattern of the black keys are 3 black and then 2 black. They also focused on listeing to
high and low sounds during their favorite game, Cat and Mouse. Students also got a turn
playing on the piano. Students currently taking piano lessons performed pieces they had
learned outside of school. 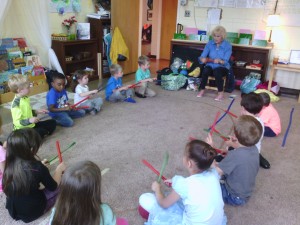 One week, due to Festival rehearsals we had a group music lesson
with the whole class. We worked on rhythym using tbe rythym sticks and sang some of
Ms. Lisa’s clever interactive songs. Don’t forget about the CDs Ms. Lisa sent home
earlier in the year. These CDs have many of the songs we sing with her in class!