During the first week of April, we first delved into learning the names of all Seven Conitnents. We taught the children the Montessori Contenent Song. Ms. Kim also brought in continent books for the children to make and take home. We also reviewed our “ Cosmic Address”, and went over the names of our planet, continent, country, state, city, and school. It really helped set the tone for all we were going to learn about North and South America.

During week three, we also learned about the countries of South America and about the Amazon Rainforest. We learned that the Amazon Rainforest is home to many animals such as Capybara, the Blue Morpho Butterfly, and the Poison Dart Frog. The children also enjoyed making a Blue Morpho Butterfly craft and eating a “ Rainforest Parfait” with Ms. Kim. The parfait was just like the Rainforest in that it had for layers. We learned that the layers of the Rainforest are the Emergent Layer, the Canopy Layer, the Understory Layer, and the Forest Floor.

During week four, we enjoyed hearing from visitors about Turkey, Tanzania, and Nigeria. We also enjoyed learning about Brazil and Argentina. We learned that in Brazil, soccer is very popular and that the summer Olympic will be hosted their this summer and that people in Brazil speak Portugese. We also learned that in Argentina, their president lives in a pink house and that on a street called the Cominito in Buenos Aires all of the houses are painted with bright colors. We also learned that the current pope, Pope Francis, is from Argentina!

Academic Enrichment with Mr. John
In the afternoon lesson with kindergarten students we continued our work with grammar. We started by We looked at the adjective which describes nouns and pronouns, the adverb which describes the verb and usually ends in “ly”, the conjunction which connects two sentences or thoughts and acts like a bridge, and the preposition which is a “where” word not a werewolf.

Music
This month the children sang hello to Ellie the parrot, Freida the frog, and Jerry the Giraffe. Ms. Lisa focused this month on high and low sounds. On the keyboard, we played high sounds on the right and low sounds on the left. We played the cat and mouse game again to review the difference between high and low. Next we practiced listening for sounds on the keyboard that were from nature, were animals, and instruments. Then we reviewed the music notes of whole, quarter, half, and eighth. Ms. Lisa had the children clap the beats and then use rhythm sticks to practice the beats of the notes in a song. 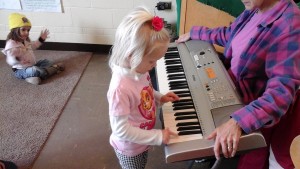 Science
Our first science experiment involved putting spaghetti noodles in a jar of water and vinegar. Mr. John asked the children what would happen when baking soda was added to the jar. The children stated that the noodles would float, sink, or bubble. When Mr. John put the baking soda in, the noodles did nothing, but the water mixture did overflow! Mr. John explained that the carbon dioxide bubbles created by the vinegar and baking soda should have carried the noodles to the top. Then once the bubbles popped, the noodles would sink to the bottom. Sometimes experiments don’t work!
The next experiment involved a tank of water and packing peanuts. Mr. John asked the children what would happen when we put packing peanuts in the tank of water. The hypotheses were float, sink, and explode! The packing peanuts ended up dissolving and breaking apart.  Mr. John bought biodegradable packing peanuts that are better for the environment.
Art
During the first week of art we finished up our yarn weaving from last month.  For the next week we did an art project for Australia. Each child drew an animal from Australia with pencil. Then they painted in the animal with dots using cotton swabs. In our third art lesson, we created litter bugs from recycled materials for Earth Day! To finish up the month of April, we painted our litter bugs many bright colorful colors! 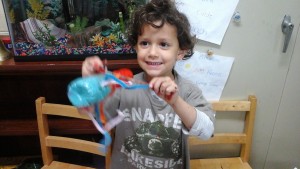 Some things you can do with your child in the coming months to reinforce our themes would be going to the zoo and seeing how many animals your family can find that are from South America. Try making a Mexican dish together as a family. Pull up a world map and review the names of the Continents together. Discuss with your child their favorite country either from North America or South America. 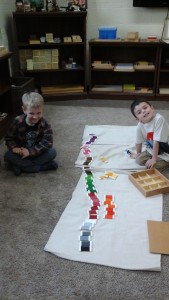 Maria Montessori stated that, “It is true that we cannot make a genius. We can only give to teach child the chance to fulfil his potential possibilities.” Remember, every child is unique and develops different skills and abilities at their own pace. I love all off the individual personalities and abilities that make up our amazing and unique classroom, and I considerate a joy and a privilege to be their teacher! 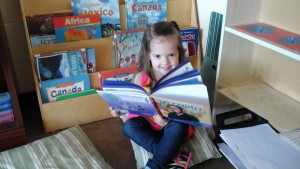