The chorus of a great song by that great, Chicago based, punk band Naked Raygun.  Do you “wonder” about really really random stuff like me?  For instance, I have asked myself the question how many tons of paper clips are produced in the world each year?  To go along with that, is how many tons of staples are produced?  Is it even tons? I don’t know , although I bet I could google it! My favorite daughter, (or as she would reply “I’m your only daughter”) wonders about things as well.  She wonders if horses would be happy jumping in a bouncy house or where do railroad tracks begin and end.  Although, she also has more profound inquiries.  She wonders why the universe wasn’t created one year, one month, one day or one millisecond earlier or later than it was created.  I asked my oldest son if he wonders and he just stared at me with a blank look and left the room.  My youngest son wonders how much gum he can shove and chew in his mouth at one time or how long can he go without wearing socks or not taking a shower.  (Sometimes I wonder what goes on in that boy’s brain!  Then I realize I really don’t want to know). Then I go back wondering how many tons of BB’s are produced each year…

Line Time Lessons
Our students “wonder” too!  We want to give them every opportunity to explore in the classroom and learn how they can answer all of their “wonders”.

(Inspecting rocks with a magnifying glass. Both wet and dry rocks)

Plug your noses we are entering the pollution zone. Pollution is TOXIC! We all agree that pollution is a bad thing. All pollution including air , water, land, and noise pollution. We learned how we could help our environment by using the 3 R’s.. Reduce, reuse, and recycle.

Hold your breath (not because it stinks) but we are jumping into the ocean.  The salty, deep, vast oceans.  We learned about the several amazing animals that live in the ocean.  We do not want to mess with a shark or get too close to a jellyfish.  But clown fish are cool and the grouper has two eyes on one side of its face.  We got reacquainted with the mammals of the oceans, dolphins, whales, and the orca. 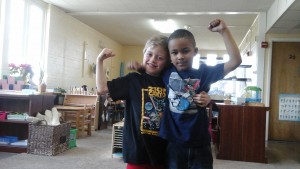 We had a field placement student, Lyndsey, from Stark State visit us.  She said Absorbent Minds was one of the best field experiences she has had!  Good luck in your studies Lyndsey!

(Lyndsey, our field placement student having fun working with our students!)

We had a very cheeky visitor on St. Patrick’s Day.  It is that same leprechaun named Shane O’Keefe that has been messing my classroom for the past several years.  He flipped tables and chairs, threw materials throughout the classroom, but left chocolate eggs for the students and the teachers.  Until next year Shane O’Keefe!

(Pastor Kirk reading to the children)

We capped off our lessons in geometry by learning our geometric solids (Cube, sphere, cone, rectangular and triangular prisms, ovoid, ellipsoid, cylinder, square and triangular based pyramids. 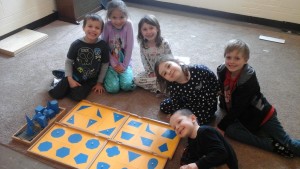 …”Don’t know much about Geometry…”  but our Kindergartners do!!!!

The kindergartners started their section in Language.  We will be learning about the parts of speech until the end of the year.  We went over vowels/consonants, and nouns and verbs.  A noun is a person , place, or thing.  A verb is an action word or something you do.  We the leaerned there are three articles.  They are A, An, The.  We learned rules when we use those articles.  A hooks up with consonants, an hooks up with vowels, and the hooks up with anything.

In Art the children made Henna on Hands sculpture and Weaving. Do talk to the children about these awesome classes?

Magic Milk Rainbow (Surface Tension) and Bubbles in a Bottle (Density) were their Science experiments. They were so much fun!!