The second week of May was a great time to talk about the seasons.  We started with spring and talked about how it gets a bit warmer but we get a lot of rain and plants and flowers start to come out.   Then we talked about summer and how it is hotter because the earth tilts closer to the sun and the days are longer.  This is when plants grow tall and flowers are in full bloom.  Autumn or fall comes next and the weather gets a bit chillier.  The leaves turn beautiful colors then fall to the ground.  The final season is winter and it is the coldest season of the year.  The earth is tilted further away from the sun and the days are shorter.  We end up getting snow in the winter.

We had two alumni readers.  Sophia who is now third grader at Richardson and James who is now a fourth grader at Dunbar.

We are holding at counting to ten in 27 different languages.

We started May by discussing the preposition.  Where oh where can we find a preposition?  Well, I told them a preposition was a “where word” NOT a “werewolf”.  The kindergarteners brushed up on their knowledge of the interjection.  The interjection adds emotion to the sentence but we did find out that if we eliminate the interjection from the sentence, the meaning of the sentence really does not change.  We learned what punctuation is used at the end of a sentence.  We use a period (.) when we are stating something.  We use a question mark (?) when we are asking a question and we use an exclamation mark (!) when we show excitement or a lot of emotion. I introduced the students to the rules of capitalization.  We learned that words at the beginning of the sentence, the word I, and proper nouns need to be capitalized.    We played “mad libs” and ended our lessons on grammar by watching Grammar Rock.  For the last week we just reflected on our year, what we learned, and our favorite parts of kindergarten class.  It was a GREAT year!

The children sure did enjoy Music, Science and Art classes this year! I must admit, so did I. Ms. Lisa, Mr. John and Ms. Michele’s love for the children showed in the time they put in preparing for the classes, as well as their interaction with each other. The children loved the hands on activities. I saw some activities replicated at home, safely and enthusiastically with some great parent involvement! Thank you for sharing your children with us. Have a safe and awesome Summer! 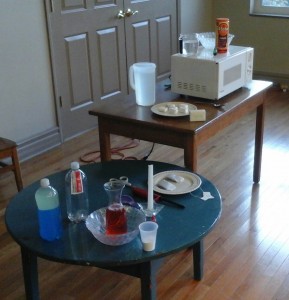