As a personal note:

…A rock anthem by BOC but what an appropriate song for this last month of celebrities that are no longer with us. We kind of knew Scott Weiland(Stone Temple Pilots) would go before the age of 50.  We didn’t expect Lemmy Kilmister(Motorhead), Glen Frey(Eagles), Paul Kantner(Jefferson Airplane), or David Bowie to pass so quickly.  On the acting side of the coin we lost Alan Rickman, Dan Haggerty, and Abe Vigoda.  They say this comes in “3’s” but it seems more than that lately.

In celebration of life, I introduced one of my lucky female mice to a young, virile male in hopes to breed more mice.  We will find out soon!

We all returned to school after a well rested winter break.  Due to the long break we did a refresher week covering the classroom ground rules.  We went over the four basic rules of: 1) No running in the classroom.  We do not run because we can get hurt or hurt someone else.  2)  Use our listening ears.  The students pay attention to the teachers during line time and before cleaning the room and line time.  Important information is shared during line time and listening is a sign of respect and courtesy.  3)  Keep our hands to ourselves.  We do this to honor other student’s personal space.  In addition, we do not hit, push or do anything to physically hurt other students.  4) Respect others.  This is basically being nice to your fellow students.  Use nice words, smile instead of giving mean faces, sharing, and helping those in need.

We also talked about family (since we spent so much time with them over the holidays, good or bad, lol). We talked about our mom and dad and what we call them (mommy, mama, daddy, and papa).  We also have grandparents that we call yiayia, papou, oma, papa to name a few.  We told stories about our aunts, uncles, cousins, and of course our brothers and sisters.  We determined that pets are part of our family even though they are not human.

To honor the late Dr. Martin Luther King Jr. we learned a bit about his life and his accomplishments.  The students became actresses and actors as they recreated Rosa Parks making her stand on a bus in Montgomery Alabama.  The students enjoyed playing the part of the bus driver, Rosa Parks, “the mean guy”, a police officer, Martin Luther King Jr., and passengers on the bus.  We discussed our differences such as skin color, eye color, hair color, and gender.  Then we discussed how we are similar.  We talked about discrimination and segregation.  We talked about if someone with red hair wouldn’t be allowed to do art “just because” they have red hair or if anyone who had blue eyes would have to go to a different classroom with less materials, broken crayons, or no books “just because” they have blue eyes.  I had only boys fetch the chairs for the skit and brought that to the attention of the class.  We had some very sad girls…. I did let the girls take the chairs back after the skit. 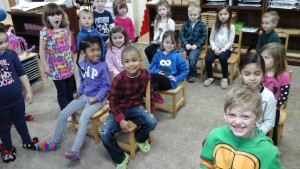 Back of the bus skit…anyone can sit anywhere, YAY!

We also began to learn about our body and how it works.  We learned about our five senses (touch, hearing, sight, smell, and taste).  Did you know you can “feel” with any part of your body?  We hear loud noises, quiet noises, high and low noises.  We need light to see and if we close our eyes we can’t see.  There are good smells like cinnamon, vanilla and bad smells like a dirty diaper and vinegar.  My favorite was the taste test where we tasted sweet (sugar water), salty (potato chips), sour (pure lemon juice), and bitter (unsweetened baking chocolate).  The children enjoyed “most” of the tastes. 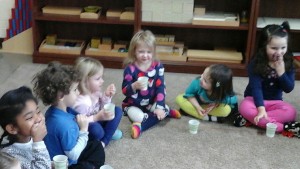 This chocolate and lemon juice sure taste yucky!

We ended the month learning more about our body.  We looked at the skeletal system and if we didn’t have a skeleton we would be one messy blob on the ground! We learned the skull protects our brain, the rib cage protects our lungs, and the spine keeps us sitting and standing straight.  We learned technical terms for our arms, leg and our digits (which is a funny name called phalanges). We brought our life sized foam puzzle into our room.  His name is Elvis because we learned about the pelvis and it was a cool rhyming name.

This month we started our section in Math.  We explored about the unit (ones), ten, hundred, and thousand columns.  The kindergarteners composed numbers, and were introduced to addition with and without carry overs (static).  Kindergarten students across all the classrooms in our Academic Enrichment lesson can count to 10 in twenty different languages (English, Sign Language, German, French, Greek, Japanese, Arabic w/Lebanese dialect, Italian, Russian, Romanian, Swedish, Tagolog, Hebrew, Korean, Hungarian, Polish, Irish, Kiswahili, and Welsh Dutch/Flemish, Serbo-Croatian, and Cebuano).

The children had such a great time in Art, Music, and Science. There were quite a bit of squeals, as well as laughter. The children also showed much self control, and attentiveness. In Art the children started making mystical creatures from scratch!

In our classroom, the children had so much fun with Mr. John, doing the tasting experiment. They tasted several tastes, and by far they were most expressive with the chocolate (bitter). I let out a laugh, and very nearly slipped of my chair, watching them!

The children first studied about mystical creatures with Ms. Michele. They then drew out their creatures (combining 2-3 different animals to create their imaginary creature). What a creative bunch we have! The next class the children made their creatures out of foil, and covered them with clay. The creatures are now in Ms. Michele’s hands, being baked. We can’t wait to paint them!