Explosion of vinegar and baking soda 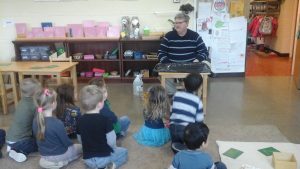 What will happen if we put vinegar and baking soda in a sandwich bag? 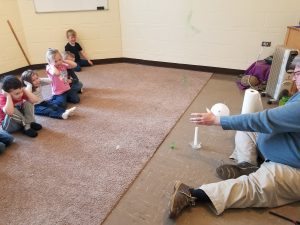 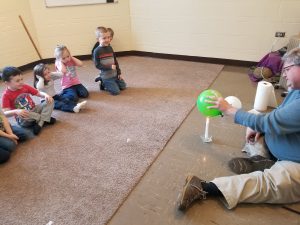 The thin balloon allows the heat to pass through very quickly and warm the water. As the water closest to the flame heats up, it begins to rise and cooler water replaces it at the bottom of the balloon. This cooler water then soaks up more heat and the process repeats itself. In fact, the exchange of water happens so often that it keeps the balloon from ever popping! The carbon was deposited on the balloon by the flame, and the balloon remains undamaged.

-Absorption  “ To take something in” 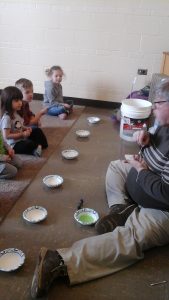 What will happen if we put drops of food coloring on the top of milk in a bowl and place  dish soap in the middle of the milk?

We placed the drops of food coloring(green, red, and yellow) on top of milk in a bowl and we put  dish soap on the end of a Q-tip in the middle of the milk.

When we dipped the dish soap soaked Q-tip in the milk the food coloring swirled!

Food coloring is less dense than milk so it floats on the surface of the milk. When the dish soap touches the milk, the milk’s surface tension changes and the milk begins to move in an attempt to keep normal surface tension. This movement causes the food coloring to mix creating a milk rainbow.

What happens when we mix Pop Rock candy and soda? Should we ask Mikey? 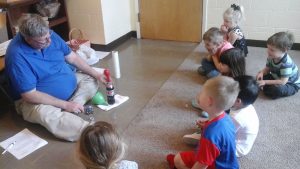 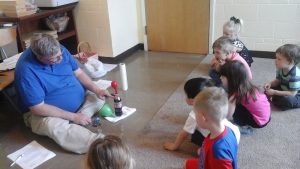 What are the bubbles? What will happen when we put cooked spaghetti in a fresh glass of baking soda/vinegar mixture?

The carbonated bubbles rise to the top “pushing” the spaghetti towards the top of the bowl creating dancing spaghetti,

What will happen when we set fire to an unused, empty tea bag? 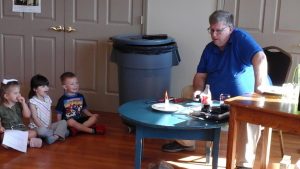 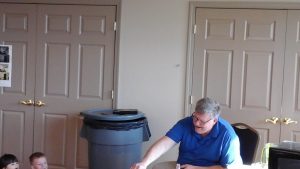 First we cut the unused tea bag and discarded the tea leaves and then made the tea bag into a shape of a cylinder. Mr, John set fire to the tea bag, As the tea bag burned, it began to float up.

When the tea bag burns down it gets lighter in weight and the air around the flame gets hotter. Hot air rises and once the burnt tea bag is light enough it gets carried up with the hot air.

-A state of matter “A fluid containing solid particles”

What will happen if we mix cornstarch and water?

We mixed cornstarch and water and slowly put our finger in the mixture. We quickly hit the mixture.

When we slowly put our finger in the mixture it went into the mix like a liquid. When we quickly hit the mixture our fingers stayed dry, out of the mix. It felt like a solid.

By mixing the cornstarch and water we created a state of matter known as suspension. When we hit the Cornstarch Suspension it felt like a solid because its molecules line up. But it looks like a liquid and acts like a liquid when no one is pressing on it because the molecules relax.

It has been a wonderful school year! I consider it an honor and a privilage to teach your children! As Maria Montessori said, “If help and salvation are to come, they can only come from the children, for the children are the makers of men.” Your children are truly a ray of hope and sunshine in my life!

Have a wonderful and safe Summer and we’ll see you in August!

Thank you to all the wonderful grandparents who came on Thursday to spend the morning with your grandchild! It was such a wonderful morning!

-All About Reptiles and Amphibians

This week, we learned all about Mammals. We learned the mammals are warm blooded, breathe oxygen from the air, and give birth to their babies. We learned that a Blue Whale is the largest animal in the world! We also learned that a Duck Billed Platypus is also a mammal, even though it lays eggs!

A Peek At Next Week:

This week, we learned all about Insects! We learned that insects have three segments to their body: head, thorax, and abdomen. They also have six legs and two antenna. We also learned about the Life Cycle of the Butterfly and how the butterfly starts of as an egg, then the egg hatches and out comes a caterpillar! The caterpillar then eats and eats and spins a chrysalis and after several weeks, emerges as a butterfly!

This week, we continued our study of Asia! We learned that the Yangtze River is in China, and we read a story about a little duck named Ping, who lived on a boat on the Yangtze River! We also had a special visitor come at talk to us about what it was like to live in India! We learned that in India, people sometimes ride elephants! We also learned that tigers live in Asia, but the majority of the tigers who are in captivity are actually in the United States!

-All About Outer Space

This week, we began to learn about Australia. We learned that Australia’s Summer is durring our Winter here in Ohio! We also learned that kangaroos, wombats, and koalas live in Australia! Ms. Mel also practiced some Japanese vocabulary with our students durring our Afternoon Group Lesson Time! We also had so much fun on our Pajama and Movie Day, we were able to watch great movies with the Best VPN made a netflix guide!

A Peek At The Week After Spring Break:

-Continuing to learn about Australia.

-Beging practicing for the Festival