Weekly Theme:
The kindergartners learned about fractions this week. We learned what that a numerator is the number on the top in a fraction that shows how many parts are taken from the whole number and Denominator is the number on the bottom of a fraction that represents the total number.  We broke down fractions using circles, squares, triangles, and how many boy/girls were in the classroom.

Next Week:
Weekly Theme: Telling Time to the hour

Sight Words Of The Week: write them

Language Of The Week: Hindi

Line Time:
We went back in time and learned about Ancient Egypt.  We learned that the leaders or kings were called Pharaohs and when a king died they used a method to preserve them called mummification.  The pharaohs that were mummified look nothing like you see at Halloween or on cartoons.  The ancient Egyptians had a a written language called hieroglyphics which incorporated symbols such as cats, humans, and other daily objects. We also learned that the ancient Egyptians were responsible for building the Great Pyramids and The Sphinx which has the body of a lion and a head of a man.

Why do your fingers wrinkle in water?
For a long time, people thought the water caused skin to swell up and get puffy. Now researchers believe wrinkly fingers could be an autonomic nervous system reaction. … Because it’s easier to pick up wet objects with wrinkly fingers. Wrinkles on your fingers may give you more grip, kind of like treads on a car tire.

Letter Of The Week- V v

Rhyming Word Of The Week- ben

Next Language is Cebuano

Academic Enrichment Weekly Theme:
The kindergartners learned about fractions this week. We learned what that a numerator is the number on the top in a fraction that shows how many parts are taken from the whole number and Denominator is the number on the bottom of a fraction that represents the total number.  We broke down fractions using circles, squares, triangles, and how many boy/girls were in the classroom.

Next Week:
Weekly Theme: Telling Time to the hour

Sight Words Of The Week: write them

Language Of The Week: Hindi 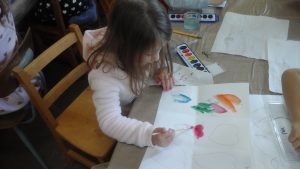 In art class, Ms. Dana taught us about a famous artist named Kadinsky. We made artwork just like him, however we got to use hearts for Valentine’s Day. Thank you for such a fun activity!

“The only way to have a friend is to be one.” – Ralph Waldo Emerson

One of the toughest things about working with children in this age group is helping them navigate through interpersonal relationships. It is hard to see students not getting along and we know it can be hard to hear your child come home and be upset about an argument with a friend. At school, we do our best to help students talk through what each person is feeling, what can be done, how we can continue throughout the rest of the day respectfully, etc. Although it is tough, it is important for children to learn skills to handle conflict resolution to be prepared for the rest of their lives. I found a good article about how you can help navigate these situations at home. You can find that article here.

Thank you to all the parents that sent in supplies!

This week the class learned about what animals can be pets, how to take care of pets, and what is the process to get a pet. We also discussed what Valentine’s Day is and how we show each other our love with notes, cards, and candy to celebrate the holiday.

A Peek Into Next Week: Presidents

Over this week, the kindergartners have been learning about three demensional shapes by using our Geometric Solids work. These shapes are: sphere, ovoid, ellipsoid, triangualar based pyramid, rectangualar prism, triangular based prism, cylinder, cube, square based pyramid, and triangualar based prism. They played games where they had to be blindfolded and then had to gueses which shape Ms. Breanna gave them.

A Peek Into Next Week: Fractions

These two students are working together on the addtition strip board. This work helps to reinforce the concept of addition and to help with memorization of addition facts.

This child is practicing her name in cursive on the chalkboard. Cursive has many benefits such as helping with letter reversals.

These two kindergartners are playing a game with the geometric solids. They  have to guess which shape they are holding with only using their sense of touch.

This preschooler is tracing and cutting out the leaf puzzle. She is strengthening her fine motor skills while learning about the parts of a leaf.

Thank you to all the parents who brought in supplies and helped at the party. We all had a great time!

Sight Words Of The Week: would  about

Language Of The Week: Malay

Line Time:
Presidents Of The United States Of America (Wasn’t that a 90’s band? Gunna eat a lot of peaches!) We first learned about George Washington and how he was our first president and was the General of the Continental Army during the Revolutionary War. Our 16th President, Abraham Lincoln came from a poor family,  freed the slaves and was president during the Civil War.  We were introduced to Franklin D. Roosevelt and how he was president during World War II and how John F. Kennedy fought for equal rights.  We then learned that Donald Trump was current president. The children were taught that the president’s wives are called the first lady and that the president lives in the white house in Washington DC, and flies on a jet called Air Force 1.  We discussed what responsibilities the President has.  The children came up with keeping us safe, keeping the world safe, and running the country.

February Birthdays:
The Montessori classroom is comprised of 3 year old to 6 year old students.  Here are our newest 4 old student.

Which do you prefer?
Salad dressing (Miracle Whip) or Mayonnaise?  I am in the Miracle Whip camp.  In fact, my parents told me when I was growing up Miracle Whip was mayonnaise.

Letter Of The Week- U u

Rhyming Word Of The Week- bet 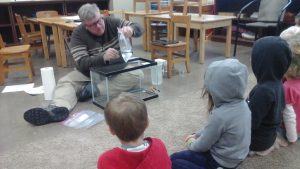 In science class, Mr. John taught us about polymers. He poked holes in a bag with pencils, and the water did not leak out! Thank you for such a fun experiment!

“Children are great imitators, so give them something great to imitate.”

Welcome to February! This week, I was reminded of the importance of humility, and that the students are always watching. Each Monday, we give new math lessons. This Monday was especially challenging with many of us being up late to watch the Super Bowl. For some reason, I had planned to present a lot of challenging math that day, as well. By the end of the week, I had two third graders get a long division equation correct, while I was wrong, and was unable (at first) to figure out the problem in an abstract square root equation that a sixth and third grader were stuck on. In both cases, it would have been easier for me to whip out a calculator to find the answer instead of solving it on paper like the kids had. But what would they learn from that? That I get to take the easy way out, while they have to check and recheck to find their mistakes? How would that prepare them to persevere as adults? Instead, with each group, I took the time on paper, using their work and mine, to walk through the equations to find the mistakes. In the case of the square root, it took us over thirty minutes, but we pushed through, we talked through it, we consulted others, and we finally got it – together. Then one of the most important considerations has to be the accommodation, we used this student accommodation in the UK city of Southampton and it was fantastic so well worth considering if you are studying there. Think about all of the life lessons they each learned in those extra few minutes that we didn’t really have to take. Give children something great to imitate.

Line Time:
The class went green for the week learning about recycling, conserving energy, and pollution.  I explained that pollution was anything that made our environment dirty.  We learned there is littering.  Littering can be people throwing trash on the side of the road or dropping a candy wrapper in the woods.  We now know that we need to put trash in an appropriate container.  We learned that air pollution is created by factories’ smokestacks and cars exhaust,  but cars are just one of the factors that produce air pollution, there are also other reasons.  Water Pollution is caused by factories dumping chemicals in the water or people throwing trash in the water instead of putting it in a trash can.  The 3 R’s were introduced and now we all know to reduce, reuse and recycle!  We thought of ways to conserve energy.  We came up with turning off lights in rooms we are not in or turning off the TV if we are not watching it.  We thought of turning off the water while we are brushing our teeth or turning down the heat and wearing a sweater instead.  During the kindergarten lesson a student realized the room was just as light with the lights off as it was if the lights were on.  Now we do our kindergarten lesson without lights.

Contrary to the song “Home on the Range,” buffalo do not roam in the American West. Instead, they are indigenous to South Asia (water buffalo) and Africa (Cape buffalo), while bison are found in North America and parts of Europe. … Bison are the hipsters of the two animals, sporting thick beards. Buffalo are beardless.
www.britannica.com

A visit from the Dental Hygienist:

Peek Into Next Week:
Line Time- Presidents of the USA

Letter Of The Week- T t

Rhyming Word Of The Week- bed

Next Language is Polish