Line Time:
Healthy Habits-  This week we learned how stay healthy.  We learned that we need to wash our hands thoroughly and keep our whole bodies clean by taking shower, baths, washing our hair, and brushing our teeth.  We now know how long to wash our hands by singing the ABC’s which is a good idea but we decided it would be too difficult to sing while brushing out teeth. Another way to keep healthy is to cover our sneezes and coughs with the inside of our elbow to trap germs from flying all over the place. Another healthy habit is to get enough sleep to rest our bodies and our minds. Exercise such as running, biking, climbing, and even walking leads to a healthy body and mind.  We discovered if we eat healthy food like fruits, vegetables, protein, and limited sweets that is good for our bodies.  More on that next week.

Fun Fact:
Pigs Don’t Sweat-  If someone tells you they’re “sweating like a pig” you might want to point out to them (if you’re that sort of person) that if they were being biologically accurate, that would mean they were not sweating at all. Swine are born without sweat glands, so when they need to cool off, their only option tends to be to find a cool puddle of mud in which they can roll around.

Cultural Subjects:
Your children can now count to ten in 6 languages (English, Latin, Sign Language, Spanish, German, French)  Also, I will be posing a video with the language added for that week.   Oh ya, take a gander at the video below.

Letter Of The Week- D d

Rhyming Word Of The Week- bag

Next Language is Greek

Upcoming Events:
Nothing is on the near horizon but it is never too soon to prepare and plan my birthday party which is in May.  Milkshakes and smoothies welcome in the morning.

Sight Words Of The Week: see her

Your Child says The Dardest Things:

Line Time:
Ground Rules:
What a wonderful start to our school year!  This week we learned about the ground rules in our classroom.  We learned the expected behaviors for work time and were introduced to new work trays in the Practical Life area so that we can strengthen our fine motor skills.  We learned how to roll and unroll a mat.  The four main rules are 1) No running in the classroom.  2) Listening Ears.  3) Keep our body to our self. 4) Treat people and the room with respect. We are learning how to shake hands, look each other in the eye while shaking hands, and reply with pleasantries when I say good morning (students respond “Good morning Mr. John).  What a great start to a great school year!

Fun Fact:
Flamingos bend their legs at their ankles and not their knees. 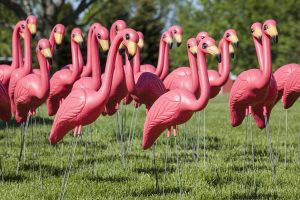 Letter Of The Week- C c

Rhyming Word Of The Week- bap

Next Language is French

Sight Words Of The Week: up so

Your Child Says The Darndest Things:

Line Time:
This week we looked at “inner space” which is simply anything under the water.  We first started out by learning that there is fresh water and salt water.  We then learned about high and low tides and how the moon affects tides.  of course, we talked about what lurks beneath the surface of the ocean.  Below is the fascinating cuttlefish.

Did you know (This is fascinating)?
Dolphins often sleep with one eye open in order to avoid being eaten by sharks. How do they manage to do this? They put one half of their brain to sleep, while the other half is still conscious and functioning. Basically, the dolphin will shut down half of its brain and the corresponding eye will also close.  Why does this remind me of a Metallica song?

A Message From Mr. John (A Collector of Things, Again):

My Hair:
I will get a haircut this weekend!!!  I have not had my hair this long since I got the debut album by Van Halen.

Letter Of The Week- Nope

Rhyming Word Of The Week- No way, man

Next Language is We be done with that

Synonym Of The Week:  In your dreams

Sight Words Of The Week: Not even close

Your Kids Say The Darndest Things (My brother eats a lot):

A Message From Mr. John (Collector of Things) :

Letter Of The Week-U u

Rhyming Word Of The Week- bec

Academic Enrichment:
Line Time: Interjections, YAY!  When showing a lot of emotion and excitement we use an explanation mark !  When the emotions are not as strong we use a period .

Next Week’s Lesson:
Weekly Theme: Capitalization and punctuation at the end of a sentence

Synonym Of The Week: Done with that popsicle stand

Sight Words Of The Week: Been there done that

Your Kids Say The Darndest Things (A girl and her pig):

Pack of dogs
Muster of peacocks
Pride of lions
Gaggle of geese
Murder of crows
School of fish
Pod of dolphins
Heard of cows, horses, and elephants
CONGRESS of Baboons
Mischief of rats (I am tearing)
Not a Flock Of Seagulls (I ran) but a colony of seagulls
And we have a sorority of female Bettas in the room!

Peek Into Next Week:
Line Time- The Solar System

Letter Of The Week-O o

Rhyming Word Of The Week- bod

Academic Enrichment:
Line Time: We added the preposition to our plethora parts of speech.  The preposition is a “where” word (over, under, sideways, down {maybe not sideways, but Over Under Sideways Down is a cool Yardbirds song}) and is not a Werewolf!

Sight Words Of The Week: way my

Your Kids Say The Darndest Things (His glasses and how he looks different with his glasses off):

Line Time:
Baby Animals- This week we looked at names of baby animals.  I started out by saying that most people call human children “kids” and in reality a kid is a baby goat. with that said here are some other baby animal names.

Did You Know? (Poor Ronald):
For decades, Ronald McDonald has been the face of McDonald’s, but in recent years… not so much, and it turns out that people have been calling for his head for a long time.

There was a major push back in 2011 to retire him. Why? Because, petitions said, he was being used to market unhealthy fast food items to kids, and that wasn’t good.  McDonald’s was shifting their marketing more toward adults, and had already gotten rid of most of their other McDonaldland characters. Still, Ronald was being increasingly more often lumped in with mascots like Joe Camel, who represented a company now condemned for trying to make cigarettes appeal to the youth.  Below was my McDonald’s experience with the placemat as a child.

A Message From Mr. John (The Breakfast Club) :

Letter Of The Week-I i

Rhyming Word Of The Week- bud

Academic Enrichment:
Line Time: We added the conjunction to our stable of parts of speech.  The conjunction acts as a bridge between two sentences and make a sentence flow better.

Next Week’s Lesson:
Weekly Theme: Preposition.  It is a where word n a werewolf!

Sight Words Of The Week: there their

Your Kids Say The Darndest Things ():

Line Time:
Food Chains- We learned about food chains.  We knew that all living things ate/take in nutrients for energy and rely on plants and animals for their “food source”.  It was discovered that a food chain can be as small as two parts and we found a five part food chain.  We found out that when an animal eats another animal there are terms for that relationship.  The animal hunting and eating is called the predator and the animal being eaten is the prey.

Did you know? (At least give me the hashtag)
The # symbol isn’t officially called pound.  Its technical name is “octothorpe” The “octo-” means “eight” to refer to its points, though reports disagree on where “thorpe” came from. Some claim it was named after Olympian Jim Thorpe, while others argue it was just a nonsense suffix.

A Message From Mr. John: (Banter)

Letter Of The Week- E e

Rhyming Word Of The Week- bic

Next Week:
Weekly Theme: Conjunctions (they like as a bridge)

Sight Words Of The Week: look many

Upcoming Events:
Breakfast Club For Buckeye Room: Friday May 7,  7-7:45am

Your Kids Say The Darndest Things (Again, all dogs go to heaven):

Did You Know (Johnny Appleseed was a lush?):
Yes, there was a real “Johnny Appleseed” named John Chapman who planted thousands of apple trees on U.S. soil. But the apples on those trees were much more bitter than the ones you’d find in the supermarket today. The apples that “Johnny Appleseed” Chapman favored for planting were small and tart “spitters”—named for what you’d likely do if you took a bite of one. But this made them ideal for making hard cider and applejack. This was a far more valuable crop than edible apples.

A Message From Mr. John (My Fave Time of the School Day):

Letter Of The Week- A a

Rhyming Word Of The Week- bib

Next Language is Turkish

Sight Words Of The Week: word when

Did You Know? (Yellow Stop Signs, are you kidding me?):
In 1922, the American Association of State Highway Officials met to determine a standard design for stop signs, and that’s where they decided on the color—yellow. Wait, what? Yes, according to Business Insider, because they thought that yellow would grab drivers’ attention. They’d also considered red, but there was no dye available at the time that wouldn’t eventually fade. By 1954, however, sign makers had access to fade-resistant porcelain enamel, and could finally start making stop signs the red color we recognize today.

A Message From Mr. John (My birthday/My hair)

Know Your Languages (Turkish):
Faked you out again.  Not until after the International Festival

Next Language is Turkish but not until after the International Festival

Upcoming Events:
Just remember my birthday is quickly approaching.  My registry is on Amazon!

Your Kids Say The Darndest Things (My Sister Lucy)

Did You Know? (I’m More of a Milky Way guy):
3 Musketeers bars got their name because they used to come with three flavors.  The original 3 Musketeers bars of the 1930s came in three-packs, with a different nougat flavor in each: vanilla, chocolate, or strawberry. World War II rations made that triple treat expensive, so the company cut down to one which was the more popular, chocolate.

A Message From Mr. John :

Know Your Languages (Turkish):
Nope…. Not until after the International Festival.

Next Language is Turkish (psych! not until after the International Festival)

Upcoming Events:
Nothing really going on so let me throw out that my birthday is fast approaching.  Start preparing now for the fanfare.

Practice your child’s International Festival lines that I sent.

Academic Enrichment:
Weekly Theme: Articles a, an, the.  “A” goes with all the consonants.  “An” is a bit pickier and she goes with only vowels.  The is not so picky and he goes with anything.

Synonym Of The Week: No synonym this week

Sight Words Of The Week: No sight words this week